The Greenhouse is really green!

Having had professional greenhouses for the past twenty-four years, and a series of smaller, homemade greenhouses for nearly twenty years before that, living without one was not an option, especially since all those seeds I ordered (see “First Seed Order” post) will need a place to grow!  And part of the whole essence of a potager is having a constant supply of baby plants to plop into place the moment anything is harvested so the design is always appealing, and having as much fresh produce to harvest throughout the seasons as possible.  That will be much easier with a greenhouse. In late February, I started researching hobby greenhouses on the internet, and found several models that sounded promising.  I read all the reviews, changed my mind many times, and finally settled on a model.

However, by then, we were opening the farm for its final season, and all the preparations and the daily job-list just superseded actually placing an order.  That turned out to be a good thing.  As I talked to customers, I discovered that some of them had hobby greenhouses of their own.  Some were happy with them, some were not, but everyone who had an Essex Greenhouse was delighted.

This was exciting to me, because Essex Greenhouses are made right here in Indiana, in fact, just a few miles away, near Bluffton, and yet I’d never heard of them!  I immediately checked their (I should say “his” website….this is a one-man business) and saw three different models, one of which was very similar to the type I’d planned to order.

Paul Clements started his business after retiring from a very successful engineering career.  His wife grew orchids as a hobby, but was constantly dissatisfied with her small greenhouse.  Paul knew he could design and build something better, and he did, refining the process and materials over the years.  Now he builds and ships greenhouses all over the country.  That’s Paul on the right, with one of his models.

I placed my order for a 10’x12′ “Millford” immediately upon visiting.  I chose the single screen door (as opposed to a sliding door shown above) and the green powder finish (although I could have chosen white) to match the roof on the Lady Cottage. The powder finish will never rust or have to be repainted.  The price was MUCH better than the other companies I’d considered.

The basic unit included not only manual roof vents, but also an automated vent (shown open above in the wall) and an air circulation fan that can sit on the floor or be hung from the ceiling.  Having lots of greenhouse growing experience, I know how important both of these things are.  An automated vent can prevent my baby seedlings from baking, if I happen to be away and the sun comes out.  The circulation fan can prevent damping off, molds, and rot if we have several cloudy, humid days in a row.

Shown above is the automatic exhaust fan, which works in tandem with the automated vent.  All of these were expensive add-on kits with the other companies I’d researched, but were included in the basic package with Essex.  From my customers’ testimonials, and Paul’s experiences, I kn0w his houses are tough enough to withstand our Indiana winters, snow-loads, hail, and high winds.  They come with a 10 yr. guarantee.

One of my concerns was easy-to-understand instructions, which seem to be a real problem with some companies according to reviews.  Paul provided not only a set of written instructions but a DVD showing each step.  We followed his suggestions for a treated wood foundation, anchored with angled rebar on a level bed of crushed stone.  My contractor put in the water and electrical lines before we added the greenhouse, which was much easier than doing it afterwards. 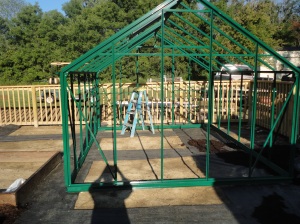 Because we live so close, Paul even delivered it (just 4 weeks after I placed my order) and stayed to help put the framework together.  It is very slick, engineering-wise, and only takes a single wrench to put together.  All of the pieces are clearly labeled, and one person could do it, although it will go much faster and easier with two.  We assembled it inside the potager, adjacent to where it would actually reside, because we’d had so much rain we could not get the stone for the base delivered before the greenhouse arrived.  Once the foundation was ready, we (two people) easily moved it into place.  Adding the clear 6MM polycarbonate panes was easy, using the wire clips Paul designed.  I put most of them in myself.  The holes for the vent and exhaust fan are pre-cut, which made things a lot easier, too.

Two features I really like are: if I decide I want to extend my greenhouse, I can order another section and easily expand my space.   Secondly, if I ever move and want to take it with me, I can unbolt the base, disconnect the wiring, remove four panels, run two 2″x4″s parallel through those openings, and two strong (or four anybodys) can move it to another location, or onto a trailer.

I already love my little greenhouse, and can’t wait to start growing something in it.  Right now there’s really no need, and frankly, it’s just too hot.  Recently, it was 91 degrees outside.  Even with the two roof vents open, and the door’s screen open, the automated fan came on once, meaning that it had reached 110 degrees inside.  But one evening, when there was a very short shower, I sat inside and just listened to the raindrops and watched them slide down the roof, and trickle through the gutters (Did I mention it has lovely gutters built-in on each side? Few other companies offer gutters, and if they do, it’s another expensive add-on!)  Now, I need two rain barrels!

(Note: I did not receive any compensation for the endorsement of this product.  If I ever do have any problems with my Essex Greenhouse, I will let you know.)

A former professional herb and lavender grower, now just growing for joy in my new potager. When I'm not in the garden, I'm in the kitchen, writing, or traveling to great gardens.
View all posts by carolee →
This entry was posted in hobby greenhouses, Potager and tagged Essex Greenhouses, hobby greenhouses, potager. Bookmark the permalink.

4 Responses to The Greenhouse is really green!