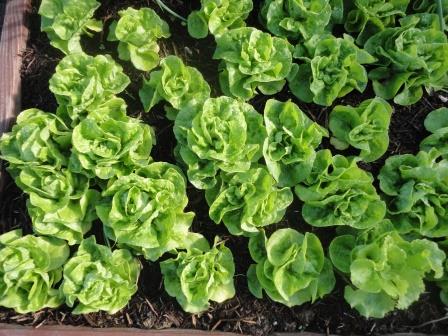 Sadly, my reluctance to cut extends into the potager as well.  I just love looking at the beautiful patterns the veggies make in my raised beds.  Just look at that lovely block of perfect “Little Gem” lettuces. How can I harvest one, and leave an ugly hole?  Even removing a few outer leaves of a pink-tinged rosette of lettuce causes me to pause.  To cut an entire lettuce plant, or a head of cabbage that will ruin the design, is truly a challenge.  I tried at first to just take out the center plant, and then a corner plant, but I couldn’t stand the unbalance, so I’d cut all four corners.  That was too much lettuce to eat at once, so we too often ate two and composted two.  Even worse was when the end result was often admiring the design until the plants actually began to bolt, then cutting the entire block and eating as much as possible before composting the rest.  And doesn’t that entirely defeat the purpose of growing one’s own food so that it can be harvested at the peak of tenderness, flavor, and nutrients?  By allowing it to reach the bolting stage, lettuce is already less tender and more bitter.  It isn’t quite so big a problem with cabbage, because extra heads can be converted into freezer slaw or preserved in other ways, but tell me a good way to preserve lettuce!  I had to cut several lettuce plants in order to create the triangular space for this winter squash plant. 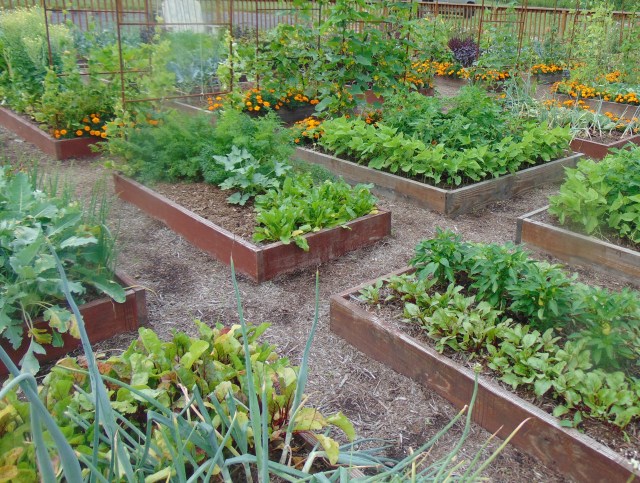 I do much better with broccoli, tomatoes, and peppers where I can harvest, but the plant (and therefore the design) remains.  However, I found that even with the peppers, I so loved those big, shiny orange bells that I let them remain on the plant too long, picking them only if I found a blemish or I was desperate for one for a recipe.  I did, however, cut the cabbage on the front right in this photo without hesitation.  It was supposed to be a miniature “Pixie” like its neighbors, but obviously wasn’t.  It was growing much bigger and overgrowing the front edging of marigolds and peach alyssum, so “off with it’s head!” 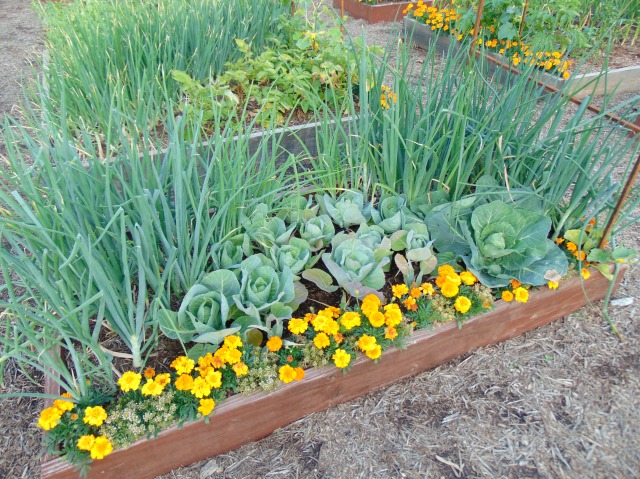 What to do?  Well, I’ve decided I must just pull on my grown-up pants and hitch them up with resolve.  This, 2017, will be the year that I harvest at the peak of perfection.  I will plant salad crops in smaller batches at a time so less will need to be harvested at once.  Some beds will be divided into four blocks rather than three, so cutting a block will be a smaller harvest.  But, most of all, I will not be so enamored of the design that I forsake the purpose of the potager.  Veggies will be harvested at the peak of perfection.

A former professional herb and lavender grower, now just growing for joy in my new potager. When I'm not in the garden, I'm in the kitchen, writing, or traveling to great gardens.
View all posts by carolee →
This entry was posted in garden design, garden planning, gardening, harvest, kitchen gardens, Potager, Uncategorized and tagged gardening, kitchen gardens, planning, planting, potager. Bookmark the permalink.