All winter we long for spring.  We dream of how the many, many bulbs planted in autumn will emerge and flower.  Will the combinations pictured be reality, or even better?  Will the timing of the bulbs with flowering trees be correct?  We drool over photos of spring blooms geographically south of our gardens for what seems weeks.  And then, finally, there are flowers appearing in our own gardens and pots.  The crocuses come, and on their heels the iris reticulata.  True miniature irises follow, the large-flowered crocus, and then miniature daffodils appear.  The forsythia blooms and daffodils emerge and sway in the breeze….unless they are folded over by the winds.  My favorite muscari, Valerie Finnis compliments the yellows with its sky-blue flowers. 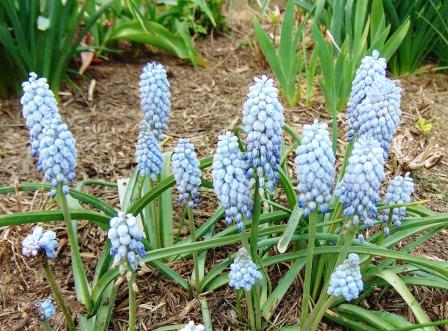 This was the first year for a fantastic daffodil, which I added to the new island bed in the front yard.  It’s called “British Gamble.”

The flowers are huge and the prettiest shade of apricot, all ruffly on the trumpet edge.  The surrounding white petals really set off the trumpet.  The stems were not only strong enough to support the big flowers, but they all survived our 55mph wind gusts!  Impressive.  I admired them daily, and remembered that while I planted them, I kept thinking of the British decision to leave the EU, a true British gamble.

In contrast, the daffodil I was most hopeful for was “Congress.”  With a name like that I should have known I’d be disappointed.  It was flashy, bright yellow petals with a somewhat squashed red-orange trumpet, but it’s flowers were not as large as touted, and it was not long lasting, so not a hard worker in the garden scheme.  Probably how it got it’s name. (Sorry, I’m not usually political.)  I didn’t even get a good photo.  My favorite daffodil is still “Delnashaugh,” a beautfil apricot and white that began blooming April 5 and is still beautiful today (the 29th).  It also has great strong stems.

For a little charming narcissus, I’d pick this one…..

called “Pippit.” It’s a bright, bright golden yellow, with a very pale, creamy trumpet, and multiple flowers on a stem.  They began April 19, and are going strong.   The tulips then came fast and furious, beginning April 9. 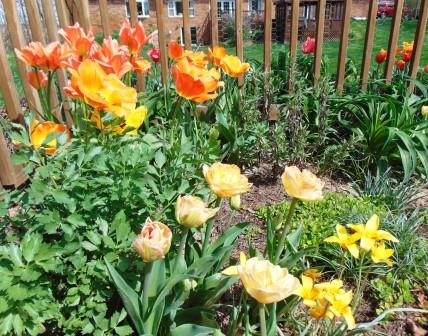 Although they were supposed to be early, mid and late, they all pretty much bloomed at once.  If I hadn’t mapped their locations carefully, I would have had trouble telling which variety was which in some cases.   In this photo, the tallest and closest to the fence are the “Apricot Emperor” just beginning to fade.  In front of them are “Daydream,” which opened pure yellow before turning various luscious shades of orange, tangerine, coral, and apricot all together as they age.  In front of those are “Charming Beauty,” more about them later, and the short ones are T. orphanidea flava, which began pale orange and faded to yellow.  In the background, behind the fence are “Annie Schilder” which proved pretty durable.  Here’s a close-up of one of my very favorites, “Charming Beauty.”

This one was one of the brightest.  Generally they are a little softer apricot, and almost like a peony.

All in all, I was happy with my plans and color choices.  It was just too, too brief.  The poor flowers were hammered repeatedly by hail, and almost daily by strong wind gusts.  The good news….no rabbit or deer damage this year thanks to Plantskydd.  I’ll replace the tulips again this fall, because very few returned from last year.  “Blushing Lady” returned, most likely because she was in a spot that is rarely watered.  A few of the fringed “Aleppo” also returned.  Tulips like to be dry while they are dormant, and since nearly all of mine are in flower beds that get watered all summer, they cannot be expected to survive.  Of course, the other bulbs will generally not only return, but multiply.  I won’t detail all the many varieties planted, but just wanted to touch on those that are becoming favorites.  However brief and battered, as long as I am physically able, I will plant tulips again and again.  To me, their beauty and grace are well worth the effort.

A former professional herb and lavender grower, now just growing for joy in my new potager. When I'm not in the garden, I'm in the kitchen, writing, or traveling to great gardens.
View all posts by carolee →
This entry was posted in bulbs, gardening, planting, Spring, Uncategorized and tagged gardening, Plantskydd, Spring, tulips. Bookmark the permalink.