Three glorious days of sunshine, so I frantically planted veggies in the potager for long hours on the first two.  Almost all of the tomatoes, peppers, cucumbers, climbing melons and beans, many lettuces, edible flowers, more cippolini and Italian red scallions are in the beds.  Several flats of marigolds, Profusion zinnias, and Montego snapdragons went into the Front Garden and Front Island.  By the third day, my back was aching and unfortunately (or fortunately?) gardening was interrupted by a full day in the city (no, not our little town, or the big town, but the real city, Indianapolis!)  I got home in time to water the greenhouse and flats, and to get one more flat of portulaca into the Deck Garden before dark.

This morning, more Double Profusion zinnias, portulaca, and some perennial orange dianthus made it into the border before the RAINS began again, but I’m falling behind.  There are so many plants to go into the ground….some are on the north greenhouse shelves

There’s 640 there, in case you’re counting.  And on the left bench there’s lots more than this photo shows,

you can’t even see them all, but there’s 340.  And underneath it are a few more on the red wagon and on the ground

in front of it.  I’m not counting those, because most of them haven’t even been transplanted into their own pots yet.  And more on the floor

some of which have been transplanted, and some have not.  (See, I’m really behind.)  And, I didn’t even take a photo of all those on the potting bench on the right.  But, let’s take a glance outside.  Here’s the bench that sits on the east side of the greenhouse, holding 540 plants 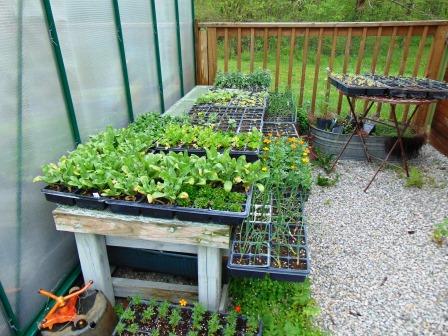 The little table has 96, and there’s another 244 on the ground.  And then there’s the double benches in front of the greenhouse

holding 956. And because I’m out of bench space, I’ve put flats on the raised beds in spots where bush melons, winter squash, etc. will go in later:

There’s 544 minus 8 in that batch.  Oh, if you look carefully in the top left, you’ll see a couple of overturned mesh flats.  They are shading some newly transplanted beet thinnings.  Yes, I’m so frugal (tender-hearted?) that I hate to discard thinnings, so I transplant nearly all of them.  Unfortunately, I didn’t calculate those in my planting plans, so I’m going to run out of space before I run out of plants.  Hmmm.  And, while we’re looking, notice those happy shallots in the center of the front bed?  Nearly all of them have divided into 8 new shallots!  And, you can also see (ugh!) bare landscape cloth on the path because (a) we’ve had so much RAIN that is has washed a lot of the mulch down the paths and out the back gate! (b) we’ve had so much RAIN that I can’t get a load of mulch anywhere near the potager.  There are more plants tucked next to the triangle beds…(which are now planted 🙂 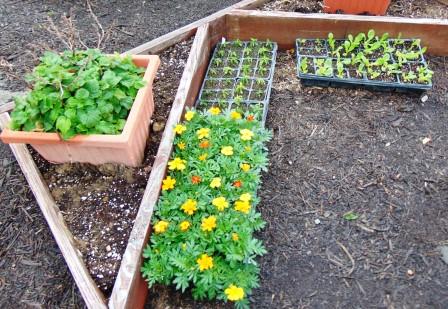 and a few flats under the double benching, on the bench under the shed overhang, and on the green table.  And, the back of my golf cart is filled with the next plants to go into the ground..when it stops RAINING!  Meantime, I’m headed to my chiropractor, so I’ll be ready and able, just in case it does stop RAINING!!!!

A former professional herb and lavender grower, now just growing for joy in my new potager. When I'm not in the garden, I'm in the kitchen, writing, or traveling to great gardens.
View all posts by carolee →
This entry was posted in gardening, hobby greenhouses, kitchen gardens, planting, Potager, shallots, Uncategorized and tagged gardening, kitchen gardens, planting, potager, rain, transplants, weather. Bookmark the permalink.