I’m learning a lot more about fava beans, or broad beans.  Here’s what I did with the first batch, a simple adaptation of a recipe by Raymond Sokolov.  I picked up his MARVELOUS book, “A Canon of Vegetables: 101 Classic Recipes” 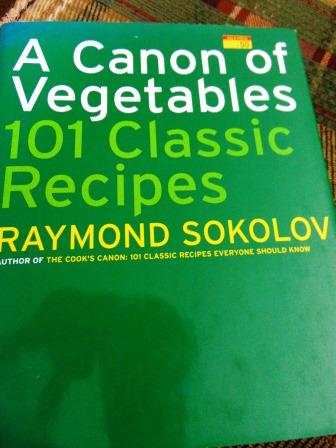 on a whim at a used book store, even though I’d sworn not to buy ANOTHER cookbook….ever,  but it was green (my favorite color!), about vegetables, and look at that price!

Yes!  An unbelievable 50 cents!  I was sure I’d get at least 50 cents worth of value from it, and without question it’s  worth ten times that.  (46 different veggies and 101 recipes)  His recipe called for hog jowl, which I didn’t have, so I substituted bacon, and it was delicious.  Probably would have been even better with hog jowl???, but I’m satisfied as it was.  First, Sokolov wrote a two page, slightly humorous tale about the history of the Vicia faba, (fava in Italy, broad bean in England) and his early adventures in traveling to sample fava recipes.  That alone was worth more than 50 cents.  Then followed the recipe, which called for 7 lb. of fava beans in their pods.  Obviously, I had to reduce it a lot, so I decided to just wing it.  He did provide good tips, which I will try on my next batch of favas as I’d already shelled and skinned my beans before I found his recipe.  He suggests that after removing beans from the pods, cook them for 2 minutes in lightly salted boiling water.  Remove quickly, drain, and place in a plastic bag and refrigerate for an hour or two.  First of all, I didn’t salt the water, but I will next time.  Nor did I refrigerate them, but I will because he says it will reduce damage to the beans when skinning, and a lot of my beans halved or were “pinched” as I removed the skins.  Those two hints are probably worth another 50 cents each!

Back to the recipe….heat a tiny bit of olive oil in a skillet.  Add 2 strips bacon, snipped into 1/4″ pieces (he called for 1/4 lb. cured hog jowl, diced and half an onion, chopped.)  I used half a small onion.  Cook until onion is translucent.  Add the favas, a bit of salt and pepper.  Stir gently until beans are heated through, about 2-3 min.  Serve right away.  His recipe served 8-10.  Mine made 3 servings. (D got 1, I devoured 2) I will definitely be making this whenever I have fava beans.

Sokolov relates that true fava fanatics divide them into four separate stages, each one requiring a different culinary approach.  Stage one is when the pods are “peach-fuzzed and only 6-7 inches long”.  Well, none of my pods were that long, so obviously I must work on my cultural techniques!  Regardless, at Stage one the skins don’t even have to be removed and the entire pod can be cooked!  Wow!  That was new to me, and worth another 50 cents!  The potager will need more fava space next year.

Stage 2 is when the beans have developed, the pods have flattened and swollen around the beans.  The beans must be shelled and the skins do have to be removed, but only require the briefest, 2 min. blanching and the beans will be bright green, are tender, and take only a minute or two to cook further.  That’s where most of my beans were, Stage 2.  He suggests a bit of oil or butter, and a sprig of savory.  I love savory….there’s another 50 cents, and I’ll be trying that out soon.

Stages 3 and 4 “involve favas too mature to bother with” because at this stage the beans are paler in color, “mealy, and are just normally dried.”  I’m not giving up 50 cents on that one, because I do wish he’d provided a better description of stages 3 & 4 and not just lumped them together.  And, if you look carefully at my photo you’ll see almost dead center a very large, very pale beige bean….it was also DELICIOUS, so I don’t agree that it was “too mature to bother with.”  Possibly my tastes are too plebian, and should be refined.  Or maybe I don’t fit the initial description of a “true fava fanatic,”…..but I’m definitely moving toward it!

A former professional herb and lavender grower, now just growing for joy in my new potager. When I'm not in the garden, I'm in the kitchen, writing, or traveling to great gardens.
View all posts by carolee →
This entry was posted in fava beans, gardening, Recipes, Uncategorized, vegetable gardening and tagged beans, fava beans, gardening, potager, vegetable gardening. Bookmark the permalink.