After an exciting Garden Writers of America conference, I’m back at the helm.  Needless to say, there has been lots of picking and preserving after a week’s absence, and now the deadheading needs completing but I wanted to get this posted before my feeble brain forgets.  This season, I planted two early varieties of tomatoes:  “Polbig” and “Park’s Season Starter.”  I’ve grown and loved “Park’s Whopper” for years and years, but I’d never noticed “Season Starter” before.  So, I planted 6 plants of each.

Conditions were as identical as possible.  Seeds were started in the same medium, place, temperature, date, etc.  Transplanting was also identical, and the beds they went into on the same date in the potager are aligned, and contain the same soil.  All were watered equally, etc. as well.  Both sets of plants seem equally healthy and are similar in size, and both began blooming within two days of one another, although “Season Starter” bloomed first. 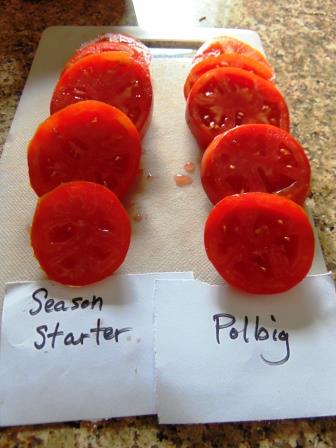 As you can see, the tomatoes are relatively the same in size and color.  D is the tomato lover in our family, so I called upon him to do the tasting.  While he thought both were “fine” when pressed for details, he declared that the “Season Starter” had tougher skin and lacked the full flavor of “Polbig,”  which was also slightly sweeter.

The clincher for me, however, is that at this point I’ve harvested 7.5 pounds of fruit from “Polbig” and only 1 pound from “Season Starter.”  There are an additional 28 tomatoes on the “Polbig” plants, and 20 on the “Season Starter” to be harvested as they ripen.  Next year, only the “Polbig” will have a place in my potager for early crop tomatoes.  FYI, “Polbig” seeds came from Pinetree Seeds, and “Park’s Season Starter” were from “Seeds N Such.”

A former professional herb and lavender grower, now just growing for joy in my new potager. When I'm not in the garden, I'm in the kitchen, writing, or traveling to great gardens.
View all posts by carolee →
This entry was posted in gardening, harvest, kitchen gardens, Potager, tomatoes, Uncategorized, vegetable gardening and tagged gardening, growing vegetables, growing your own food, kitchen garden, potager, tomato comparison, tomatoes. Bookmark the permalink.