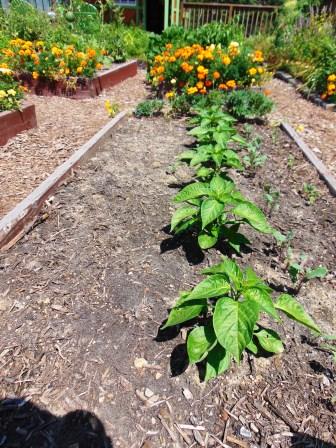 The seed catalogs are arriving daily and dreams and hopes for next season’s “best ever” harvest are spiraling upward.  As you are planning next year’s garden, may I suggest a new pepper variety to try?  As a Garden Writer of America, I often receive seeds for new plants that will be coming on the market in the upcoming season.  This past August, I was given new pepper seeds to trial called “Mad Hatter” bred by Pan American Seeds.  I planted the seeds the day I got home, germination was excellent, and in summer’s heat the plants grew quickly.  The photo above show them not long after they were transplanted into the potager, Aug. 12.  It was a bit late in our season when I planted them, but they quickly, grew to about 2 ½ feet in height.  The plants were sturdy, dark green, and didn’t flop or yellow.

The peppers themselves were about 2 ½” in diameter, with a unique shape that inspired the name because of its “hat shape” with a curvy “hat brim” atop what might be a person’s head

on the underside.  The “head” often gets a little more pronounced as the peppers grow.  As you can see, the peppers themselves are a pretty light, “chartreusey” green that eventually turn orange and then bright red.

(Excuse the wrinkled skins…I should have taken photographs earlier!)  Although the seed packet described the flavor as a “sweet citrusy flavor,” I found that they actually had some heat, especially near the seed cavity and as usual, the heat increased as the pepper matured.  Maybe that’s where the “Mad” part of the name occurred.  However, even ripe the heat was mild.  I used them raw and enjoyed their crunch and rich flavor, but the breeder says they are also excellent pickled, or stuffed with cheese, etc.  I’ll try that next year, but I used them a lot in salads at all stages of ripeness.

A bit of research finds that this new AAS Winner is a member of the unusual Capsicum baccatum species, originating in Bolivia and Peru.  The seed company indicates the plant will reach 3-4’ in height and may need support.  Mine didn’t get that tall, possibly because I planted them late, but they were amazingly productive.  I’m definitely growing them again for 2018, not only because they are so darn cute, but also because they were delicious, bountiful, easy, and fun.  Just one or two plants and you’ll be picking a peck of perky peppers!

A former professional herb and lavender grower, now just growing for joy in my new potager. When I'm not in the garden, I'm in the kitchen, writing, or traveling to great gardens.
View all posts by carolee →
This entry was posted in gardening, kitchen gardens, peppers, Uncategorized, vegetable gardening and tagged gardening, grow your own food, kitchen gardens, Mad Hatter peppers, peppers, potager, vegetable gardening. Bookmark the permalink.