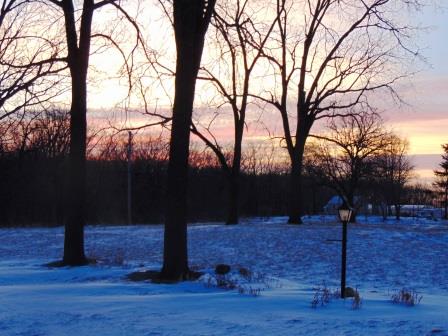 #1 are the lovely sunrises we’ve been blessed with recently.  I wish I were a better photographer to accurately capture the colors, which are more vivid than they appear above.  The day began with this lovely, pastel sunrise and a shrinking snow cover from rising temperatures.  Hallelujah! After two weeks of single digits, a too-brief two-day January thaw, and then two more weeks of single digits anything above freezing seemed absolutely balmy!   However, I was worried about the plants because during the first frigid spell there was no snow cover for insulation and protection.  By afternoon, all the snow was gone, except on north-facing slopes and heavily shaded areas.  #2.  I took advantage of the warm (51 degrees!) to put away the outdoor Christmas decorations and lights.  Next was a walkabout to assess damage.  Surprisingly, the perennials seem fine.  Witness these “Fairie Queen” foxgloves that are much livelier than I expected. 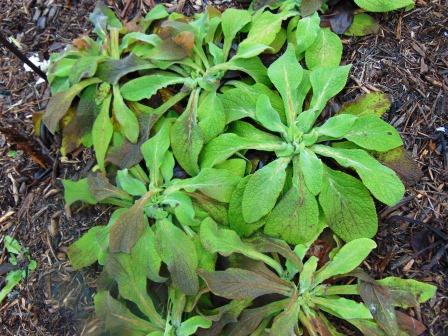 And although the lavenders are still surrounded by snow, they seem fine as well.  This one is actually a lavandin.

The primulas behind the Lady Cottage are nicely green.

So, #3 is that despite the frigid, record cold the perennials seem to be thriving….at least so far.  Next was a tour inside the potager.  I planted some spinach and Brussel sprouts late last summer, intending to cover them with a poly tunnel.  When my back went out, that didn’t happen.  I really expected them to be totally freeze-dried, but surprisingly the spinach looks pretty good. 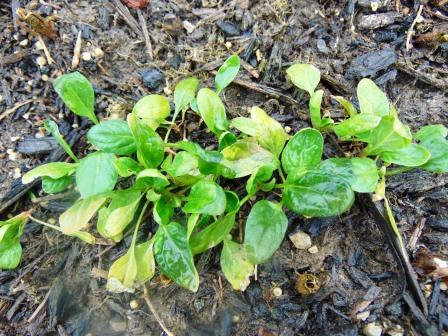 Research says that the varieties with heavily crinkled leaves overwinter better than smooth leaves, so I’ve noted that in my planting journal for next season.  The Brussel sprouts don’t look lovely, but they aren’t dead, so I’ll leave them and see if they make any sprouts in the warmer weeks ahead.

It’s an experiment.  So #4 is that there is actually a bit of hope for these late crops, and I wasn’t expecting any to have survived.  Surprise #5 were these happy little Black Seeded Simpson lettuce seedlings that have sprouted!  They self-seeded from plants that were grown to hide fading tulip foliage in the potager’s interior borders.  Happy dance time!  They are everywhere; salads ahead! 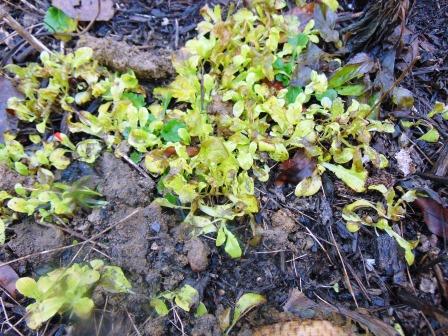 And finally, #6 are the pointed spears of various bulbs (these are daffodils) pushing through the soil, promising beauty and color when Spring does arrive.

I know there is still more winter to come, but just having this tiny respite renews hope.  And, I am truly amazed that the plants have done so well despite the record cold over such an extended time.  And, this is the final Saturday for January!  That’s worth a celebration in itself!  Bring on romantic February, longer days and seed starting time!

Thanks to The Propagator for hosting the “Six on Saturday” meme.  Go to his site and see all those who’ve joined the fun.

A former professional herb and lavender grower, now just growing for joy in my new potager. When I'm not in the garden, I'm in the kitchen, writing, or traveling to great gardens.
View all posts by carolee →
This entry was posted in gardening, Potager, Six on Saturday, Uncategorized, winter and tagged brussel sprouts, gardening, lavandins, lettuce seedlings, potager, primulas, Six on Saturday, spinach, weather. Bookmark the permalink.

11 Responses to Six on Saturday-Jan 27