One of my very favorite herbs is elder, for both the blossoms and berries are versatile and valuable.  In mid-January during another blast of winter, I pulled a bag of elderberries from the freezer and cooked a medicinal and tasty cordial.  After measuring 6 c. berries into a large kettle, adding 6 c. water and  1 1/2 c. sugar, bring the mixture to a boil.  Reduce heat to medium and cook about 5 minutes, until sugar is dissolved.  Cool.  Add 3/4 c. lemon juice.  Stir.  Then I divided the mixture into 3 parts in sterilized quart jars.

Into 1 jar (top right) went 3 cinnamon sticks.  The second jar (left) got a tsp. of fennel seeds, and the 3rd slightly smaller jar (front) received 1T. dried anise hyssop leaves, slightly crushed.  After capping them securely, and a good shake, they went into a cardboard box to shut out light.  Each day for two weeks, they got a good shake.

The final step was straining the liquid into bottles or jars.  I just let it drip through a fine strainer, and didn’t push the pulp through.  Using a bottle that had contained elderberry syrup from Germany, I washed it well and filled it with the anise hyssop- flavored cordial.

The  fennel-infused batch went into the bottle shown below; the cinnamo into a sterile quart jar.  It will go into bottles when I have some pretty ones to serve to guests or give as gifts.

And, I didn’t waste the strained berries, but spread the sweet mixture on my toast for the next few mornings.  There were a lot of crunchy seeds but it tasted delicious.  I put the “used” cinnamon sticks into a pot of tea, so nothing was wasted.

Medicinally, elderberries are immune system boosters, just what we all need during this flu season.  I enjoy a liqueur glass of the cordial before bedtime.

Elder was once a common wayside plant, growing in hedgerows and along roadsides and woodlands.  It is a hardy perennial shrub that can grow in full sun or light shade and tolerates a range of soils and moisture levels, although they produce more berries with adequate moisture.    Its stems are hollow, so it has a history of use as a “straw” or “pipes” both for moving fluids or making music!  Elder has always been considered a fairy plants, filled with magic.

I only have one elderberry bush but it is 6’ tall and as wide.  It produces enough blossoms for several quarts of elderflower “champagne” or syrup shown below, that I use for Hugo cocktails, 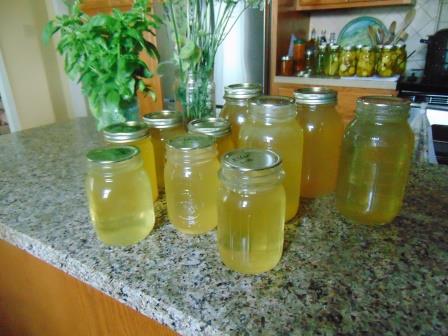 pouring over pound cake or fresh strawberries, or adding to apple pies and tarts AND still enough berries for several batches of jelly and for freezing (this year I froze 4 gallons!)  So throughout the year, I make Elderberry-Peach Cobbler, Elderflower-Apricot Tea Bread, and Chicken with Elderberry-Orange Sauce among other things.

A former professional herb and lavender grower, now just growing for joy in my new potager. When I'm not in the garden, I'm in the kitchen, writing, or traveling to great gardens.
View all posts by carolee →
This entry was posted in elder, preserving, small fruits, Uncategorized and tagged cordials, elder, elderberries, elderflower syrup, gardening, preserving, small fruits. Bookmark the permalink.