Yesterday I checked the 10-day forecast (as I always do) and beyond a slightly chilly night, the forecast was for dry and sunny and tah-dah!!! three days in a row above 40 degrees!  So, I bundled up (these old bones get cold even in the 40’s now) and loaded up the golf cart with braids of shallots, onion sets, pea seeds and a big mug of tea.  “I’m PLANTING!  I’m digging in the dirt!”  My heart was singing.  It felt glorious, and eventually as I worked I was able to shed the jacket, sock cap, scarf and gloves.  First I moved all the flats out of the greenhouse for some hardening off.  It was a perfect day for it since there was no wind at all (a welcome change!)  Now for some fun!  I began with shallots, clipping the singles from the braids to plant first. 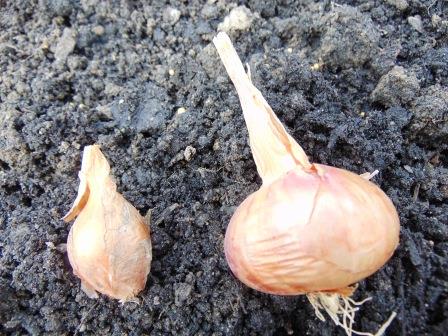 I’ve found that the singles (on the left) perform best.  They usually make 4-8 lovely large shallots.  So, over the winter the large doubles & triples like the one on the right are chosen first for cooking, but there’s a majority of them and never enough singles.  Once all the singles are planted, I’ll choose the smaller doubles, and if more are needed to complete the patterns some of the larger doubles will be carefully divided.  If I plant the big doubles without dividing them, the result is a bunch of crowded, poor-looking shallots that tend to sprout rather than store well.  Plant Dutch shallots like these just so the shoulders are covered in rows 6″ apart and 6″ apart within the rows.  If you are growing the longer, frog-leg shallots allow more room.  This year, the potager’s pattern is diagonals, so I planted two rows in the centers of most of the small beds, matching the diagonal rows of garlic in the large beds.

Only half the shallots were planted, just in case the weather experts are wrong.  Next were shelling peas.  The original plan for succession had to be modified a bit, since the first planting was optimistically scheduled for March 7.  It was already April 8th, and this LATE some of the first plantings that must be harvested and removed to make space for cucumbers and miniature melons had to be skipped.  If worse comes to worse, frozen peas can be purchased but mini melons cannot (at least in our area.)  Some large bed edges were planted with “Strike,” a short, very early pea that I’m growing for the first time to compare with the old stand-by “Little Marvel.”  No photo of those.  But here is the

“Green Arrow” and “Knight” comparison which will take place on the newly-purchased pea fence.  No clue why it looks “Blue” in the photo because it’s just gray metal, not colored.  You can see that I plant peas in a broad (3″) band rather than a single row because that’s just what works best in my experience. 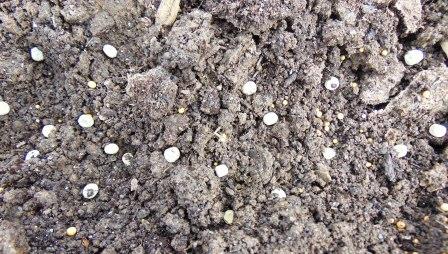 I plant thick, but not touching.  The last thing to go in were 4 rows of yellow onion sets, and when they were covered the sun had disappeared, all my warm layers were back on, and my winter-lazy muscles were saying it was time to stop.  Still, I was humming and thinking that I needn’t push too hard.  After all, there were two more beautiful days in the forecast…plenty of time to do the next items on the list.  And then I woke to this: 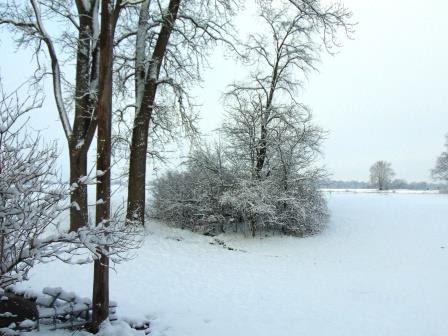 This definitely was not in their forecast.  Wrong again!

A former professional herb and lavender grower, now just growing for joy in my new potager. When I'm not in the garden, I'm in the kitchen, writing, or traveling to great gardens.
View all posts by carolee →
This entry was posted in planting, Spring, Uncategorized, vegetable gardening, weather and tagged gardening, grow your own food, Indiana weather, peas, Potager, shallots, Spring, vegetable gardening. Bookmark the permalink.