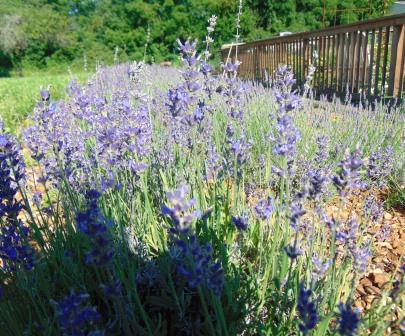 1) The heat of summer has arrived in full force, releasing the perfume of the Lavender Slope and carrying it on the westerly breezes into the potager.  It’s during heat advisory days like today that I’m glad I no longer have 7,000 lavender plants to harvest, but just the 65 on my little Lavender Slope.  Sadly, I still have not spied a single honeybee this season and they used to come by the tens of thousands when the lavender bloomed.  I think there are lavender scones in my future!   2)  The warmth of the sun has also ripened the first tomato of the season. 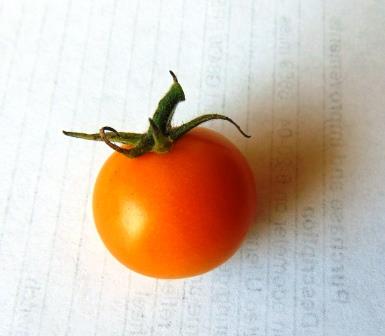 It looks large here, but it was actually a cherry-type, “Sun Sugar” which D (the tomato lover in our household) declared well-named.  To have a ripe tomato before the 4th of July is a cause for celebration in our area, so I’m pleased.  Soon we’ll be deluged with them!  Despite the heat and humidity, the final two tasks that were on the “May To-Do” list were finished at last.  3)  The little asparagus patch finally received its blanket of mulch. 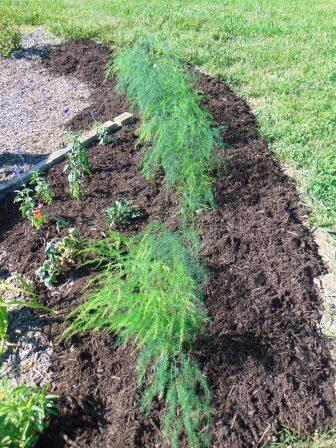 Only 8 of the 10 roots planted survived, but considering the lack of rain in April and May, and the fact that they were planted outside the potager and far from any hose reaching, that’s not too bad.  4) The Cutting Garden finally was planted, obviously later than I’d planned but earlier than last year when it was first started. 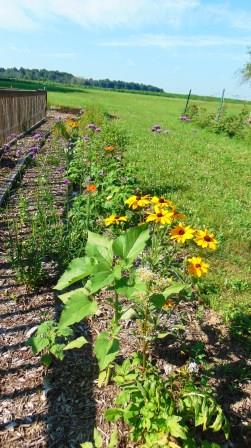 Most of the perennials: rudbeckia, mums, shasta daisies & daylilies came through the winter.  A handful of the sprinkled seeds of larkspur and cornflowers germinated and are blooming, and hopefully will self-seed for next year.  The blue salvia and tall verbenas came back in good numbers.  Mostly this year, “Inca” zinnias and “Peach Passion” sunflowers were added, with a few celosia, pumpkin-on-a-stick, tithonias, and gomphrenas.  At least now  the “May” job list can be tossed.  Think we’ll just mark out “June” and rename it the “July” list…sigh!  5) In the potager’s interior border, which is a lively mixture of herbs, edible flowers and a few vegetables, the first of the new dahlias is opening.  It’s a luscious soft orange called “Sylvia” from Brent & Becky’s Bulbs.  I think I’ll need lots more of them!  Maybe several for the Cutting Garden next year as well. 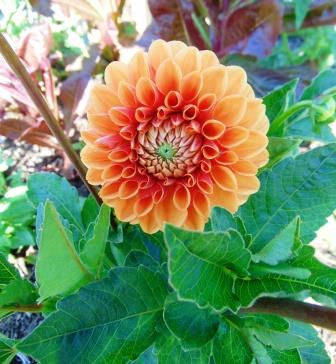 And lastly, 6) the bounty from the potager has reached the stage where we can’t eat it all fresh, so the canning season has begun. 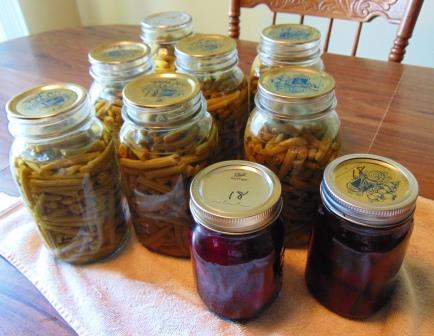 So far, just beans and pickled beets, but another canner of beans will be done today.  The freezer is already filled with strawberries, black raspberries, peas, broccoli, snow peas, and aspabroc.  A second freezer is under consideration…..  These are the six things from the potager and gardens that are making me smile on this final Saturday in June.

To see other gardeners’ contributions, visit The Propagator, who hosts this meme.  And join the fun by finding 6 interesting, beautiful, or tasty things in your own gardens to post!

A former professional herb and lavender grower, now just growing for joy in my new potager. When I'm not in the garden, I'm in the kitchen, writing, or traveling to great gardens.
View all posts by carolee →
This entry was posted in Six on Saturday, Uncategorized and tagged asparagus, cutting garden, dahlias, gardening, lavender, Potager, Six on Saturday, Sun Sugar tomato. Bookmark the permalink.