It seems June flew by in a whiz, so it’s good to take a moment to look back and review, and evaluate how the gardens fared this month.   After a very dry April and May, June had enough well-spaced rain that there was no dragging of hoses.  That’s a good thing, because there were lots of other tasks to accomplish, like planting lots of annuals that didn’t get in the ground in May!  Keen gardeners will notice that there are lots of bare spaces where bulbs were in May in the Front Island Garden.  I ran out of marigolds, and have more growing in flats, but they are only budded and won’t be planted until I know which plant is which color.  That’s a drawback of planting a mixture, in this case marigold “Durango Mix” but I love using the various colors in groupings here and there and don’t want the expense of buying a lot of packets of separate colors.  The best thing about June to me is the coming of the lilies:  daylilies, Asiatic lilies and Oriental lilies which are abundant throughout all my gardens.  The Front Garden has not gotten a makeover because the gardener is indecisive.

The dead boxwoods were removed and replaced with zinnias.   Looking at the photo, possibly more zinnias should be added.

The Deck Garden was a sea of white “May Queen” shastas in May, so it’s undergone quite a color change.  Dwarf marigolds will be added along the sidewalk and there are lots of daylilies yet to come.

The potager is packed inside, but the exterior border needs more annuals.  There are lots of zinnias planted but not yet in bloom, and the marigolds need to be added.  Plus, I think I’ll add more “Caramel” heucheras in the front.  There are a couple on the far end that are doing well, and I love that foliage.  Inside the potager, 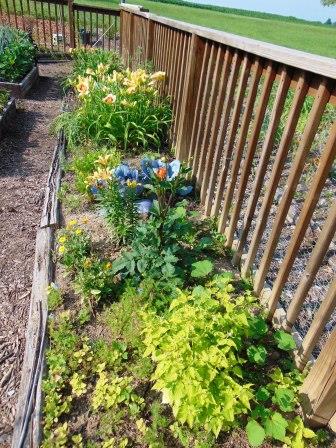 the interior borders filled in nicely.  This section is transitioning.  You may see the 6″ tall okra along the fence that were set in when the fava beans came out.  There are some empty spots in the front where lettuces were harvested and the new crops have not been inserted.  We’re under a “Heat advisory,” so it’s not a good time to plant and have to water constantly.  You might barely notice the new dahlia just beginning to open.  I’m eager to see what it looks like in reality, having only seen it in the catalog.  This is not my favorite time in the potager.

The fresh look of spring that was so delightful in May is turning into that weary look of summer.  Bed 1c looks messy because the shallots are beginning to fall over.  I’ll be much happier when they are harvested and new, upright crops can take their place.  Same case for the browning garlic in the bed below.  Those watermelons will be very ecstatic to see them go and so will I! 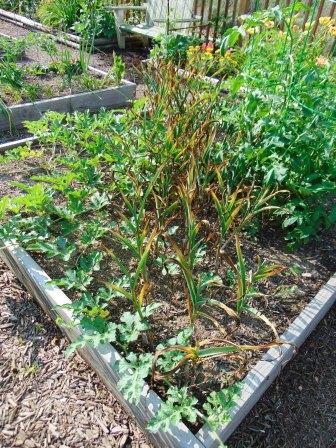 In Bed 2b (the front one in this photo)

the Italian dandelions and Swiss chard on the corners will stay, but as soon as the “Candy” onions come out, space-loving winter squashes will go in, so I haven’t replanted the triangle where bok choy was harvested.  And for right now, the lettuces that are bolting in 3b are providing some shade for the cauliflowers, so they get to stay a bit longer.  Here in bed 3c, I’m enjoying the color contrasts 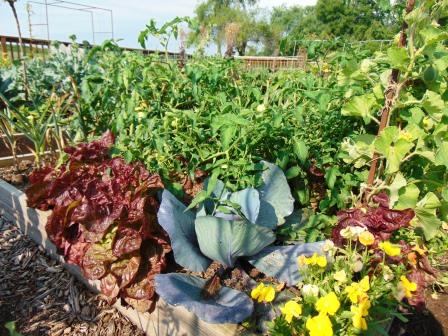 provided by the “Alkindus” lettuces, “Primero” red cabbage, the taller tomatoes, bright yellow violas and the climbing vines of the “Green Nutmeg” melons.  Potager beds can be packed, so there’s no room for weeds!

This photo exemplifies the potager as June ends.  Notice the ugly browning garlic?  That won’t be there much longer and there are “Mad Hatter” pepper plants eager to take its place, or carrots or beets.  The “Blue Wind” broccoli and “Aspabroc” will stay as long as they continue to produce side shoots, but as the cauliflower is ready (See the one in the center front with its leaves folded over the head to blanch it?) those plants will come out to make way for more winter squashes.  The “Outredgeous” lettuces are just beginning to bolt, so they’ll be eaten as fast as possible and replaced by “Dragon Tongue” beans.  Throughout the garden the transition is taking place as spring peas are replaced by new plantings of “Baby Bear” pumpkins, “Butterscotch” squash or quicker crops like these “Hickok” beans that are just beginning to bloom.

Beans will continue to be planted through the month of June so that fresh ones can be eaten rather than opening one of the dozens of cans already on the shelves from the April and May plantings.  And now for the numbers…the total harvest from the potager just for the month of June is 104.5 pounds!  Of course that doesn’t include munchies sneaked by the gardener as she worked, or bouquets picked as those are just “bonus.”  And “no,” it’s not a competition with anyone else, only with the past which was blown away.  No harvest records were kept in the potager’s first season (2016) but June’s total for 2017 was a mere 43.5 pounds.  The weather certainly doesn’t account for all of it, because it’s been crappy most of this year.  (Too cold, too dry, and now too hot!) The main reason, I feel, is that good planting records were kept and studied.  Best performing varieties were chosen from last year’s planting lists, planting dates were tweaked, and succession timing was refined which all resulted in more production.  The potager’s harvest for this season so far:  131 lbs. (2017: 57.5 lbs.)  All in all, June was an excellent, busy, beautiful, productive month.  July appears to be a scorcher, at least at the start.  It will be interesting to see how it unfolds.

A former professional herb and lavender grower, now just growing for joy in my new potager. When I'm not in the garden, I'm in the kitchen, writing, or traveling to great gardens.
View all posts by carolee →
This entry was posted in harvest, monthly review, Uncategorized and tagged beans, gardening, harvest, June garden, Potager, succession planting, summer crops. Bookmark the permalink.