A Pair of Scissors 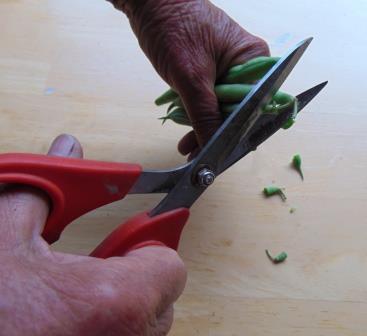 Someone asked me recently which garden tool I use most.   The answer might vary slightly with the season and the stage of the garden, but #1 is my rolling gardening stool, because at my age and with an iffy back, I can’t garden without it.  I thought #2 would be my CobraHead because I use it to dig planting holes, lever out weeds, make furrows for seeding, edging beds and covering seeds.  However, surprisingly it is a pair of kitchen scissors! Not a bucket, or a shovel, or pruners, but plain old, sturdy kitchen scissors!

Keeping track of tool usage was illuminating for me.  I was amazed at how often those scissors were in my hand!  Vines are growing like crazy, so I’m cutting twine for climbing supports and tying up tomatoes.

I use scissors to clip grass along all the flower beds.  Scissors cut the twine when I’m braiding garlic and shallots.  Scissors harvest herbs, lettuce, spinach and kale leaves and deadhead violas, calendulas and marigolds.  Scissors take cuttings of anything I want to propagate and detach seed heads for drying.

Scissors cut pretty flowers for bouquets and ugly leaves off fading cucumber vines, not to forget they cut off the cucumbers and squashes and peppers when they are ready as well.  This week I was reminded of an old technique for handling weeds.  The neighbors were really behind in weeding their veg garden.  In trying to pull up weeds nearly as tall as the crops, the bean plants were coming up with the weeds since the roots were all entangled.  I advised them to simply scissor off the weeds at ground level.  The crops will shade the decapitated weeds.  The bean roots will not be disturbed so they will grow quickly.  By the time the weeds have regrown, the crops will be harvested and the beans  can be tilled under.  Yes, some folks still use a tiller, although I don’t/won’t.  Scissoring can be much faster than hand weeding in a desperate situations like theirs.

Sturdy scissors cut the cardboard into strips to lay under the mulch for the last bit of the berry rows, and the twine for attaching the berry canes to the support wires.

Today, my fingers were sore from stemming beans.  The answer was to use a pair of scissors, which made the task much quicker & easier.  I will probably never use my fingernails for that again.  Still learning in my old age!

Just to ease your mind, I do keep rubbing alcohol in the Lady Cottage to clean the scissors after clipping anything that might be questionable so disease isn’t transferred to healthy plants.  And there are more than one pair, so one pair does indeed stay in the kitchen, one pair hangs in the Cottage, and another pair stays always-at-the-ready in the garden stool.

A former professional herb and lavender grower, now just growing for joy in my new potager. When I'm not in the garden, I'm in the kitchen, writing, or traveling to great gardens.
View all posts by carolee →
This entry was posted in garden tools, Uncategorized and tagged Deadheading, garden tools, gardening, harvesting, scissors in the garden. Bookmark the permalink.

7 Responses to A Pair of Scissors