July has been a fun month, although there were really, really hot dry days mixed in with a few cool “September feel” days, and now ending with two days of lovely, gentle soaking rains.  The weather always seems to make gardening interesting (challenging!)  The photo above shows the east half of the potager on July 1st.  For a person who loves to preserve food, July in the potager brings a bounty of produce and opportunities.  There’s been lots of vegetable canning, mostly beans early in the month.  When I returned from vacation, the cabbage was beginning to split so it was time to make kraut.  Seven quarts is enough for us and since I grow the mini heads (“Gonzales and Katarina”) it worked out perfectly.

There was just enough cucumbers for a batch of bread and butter pickles.  Another full canner of beans of various kinds was next, along with the last of the first planting of “Ruby Queen” beets for pickling.  All the golden beets were roasted.

And a batch of “Garbage Relish” used up the last bits of cabbage, some peppers, more cucumbers, a few green tomatoes that fell off while I picked the ripe ones, onions, etc. 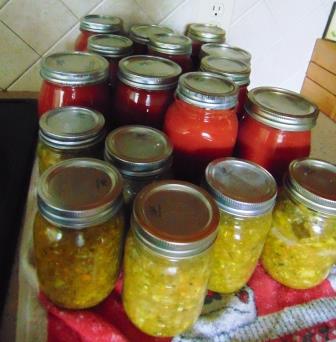 That’s a batch of tomato juice behind the relish.  There’s still 2 baskets of “La Roma” tomatoes sitting on the counter destined to become pizza sauce, but until I get to town for more jar lids they will have to wait.  They may end up in the “August” column rather than July if I don’t hurry!

Some herb drying has been done along the way, and a few syrups made.  Here’s a small batch of parsley ready to jar.

And the top right bunch drying on the Lady Cottage wall is anise hyssop. 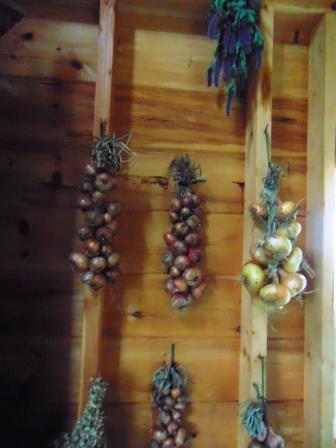 Shallot, garlic, and onion braiding provided some restful work in the shade on really hot days, and there were plenty of those.

The first of the French Fingerling potatoes were harvested.  They are not a good storage variety, in fact there’s been some spoilage within days of digging, so it’s a good thing only 5 lb. were planted.  It’s a good thing also, that I spread out the planting since they spoil so quickly.  As soon as the tops brown on a pot, we harvest and cook them immediately.  Thankfully, they really are tasty so it’s a treat, not a chore.

For a person who finds weeding relaxing, July has so many opportunities that by each day’s end I’m as relaxed as someone who visited a spa! (And it’s LOTS cheaper!) 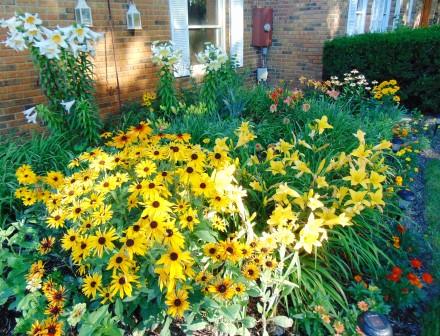 For a person who loves color, July is lots more than red, white, and blue (you won’t find any red in my gardens!)  July is the month of daylilies, garden phlox, Asiatic and Oriental lilies, shasta daisies, and rudbeckias among other perennials.

July is the month the annuals really begin to strut their stuff, filling the beds with a riot of color and texture. That’s zinnia “Profusion Double Dark Salmon.”

For a person who loves berries, normally July is “berry, berry” good, but this year’s hot, dry conditions following an extremely long, harsh winter resulted in only a handful of raspberries and blackberries, not even enough to bother weighing.  The elderberries will be abundant in the coming weeks, and the everbearing strawberries are sporting a few blooms now that it’s rained, so hope continues for some fruit in August, especially since we’ve had some rain.

For those interested in numbers, the Harvest Journal reports that the potager produced 224.5 pounds this July, a slight increase from July, 2017, which was 213.  There was very little  squash or melon harvest this year as compared to last (yes, the squash bugs won! see “Drats!”)  The shallot production was 42 pounds last year, only 23 this year.  The 2017 garlic total was 50 lbs….and this year’s crop was 31.5.  Both those reductions were by choice, since we didn’t use nearly all of either.  And, the total doesn’t include tomato, pepper, cucumber or bean pickings done by friends while we were on vacation.  So, the numbers are a bit skewed.

Here’s the east half of the potager on the last day of July, looking lots emptier than the photo at the beginning of the month.  Looks can be deceiving however, because all that “empty” space is already sprouting new crops for another harvest.  August promises to be another very good month!

A former professional herb and lavender grower, now just growing for joy in my new potager. When I'm not in the garden, I'm in the kitchen, writing, or traveling to great gardens.
View all posts by carolee →
This entry was posted in harvest, Harvest Journal, monthly review, Uncategorized and tagged French Fingerling potatoes, growing vegetables, harvest, monthly review, Potager, preserving food. Bookmark the permalink.

15 Responses to July in Review