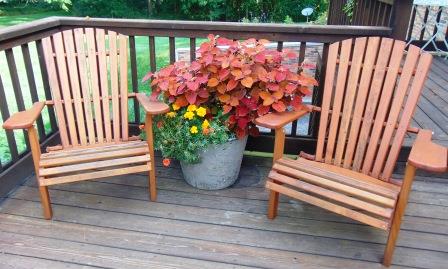 Admission time….this began as a “Six on Saturday” post, and now it’s Tuesday!  Blame it on my photo card reader dying with no time to go to town for a replacement, or on the elderberries being ready to pick, and the peppers needing to be frozen, and the tomatoes desperate to be canned…it’s a laundry list of valid excuses.  Regardless, here’s some of the pleasures of early August, beginning with the deck containers.  Some years the plant material has been more exotic, but knowing that we would be in Italy during the hottest part of Indiana summer only the tough characters were chosen:  coleus, portulaca, “Twinny Apricot” snapdragons and the faithful anemone-flowered “Durango” marigolds. 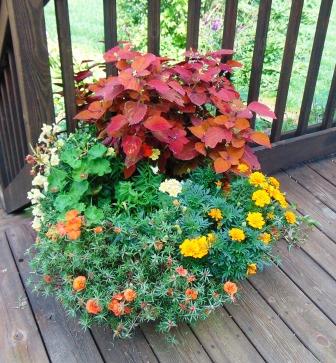 This second one also has some “Maverick Orange” geraniums that I grew from seed, but when we returned from Italy, all the blooms had dried up.  Hopefully, they will recover with a bit more attention and decide to form more flowers.  The 4 deck containers are each the size of half-whiskey barrels, so you can see the coleus have really grown larger than I expected.  The 3 rail planters hold mostly the same plant material although 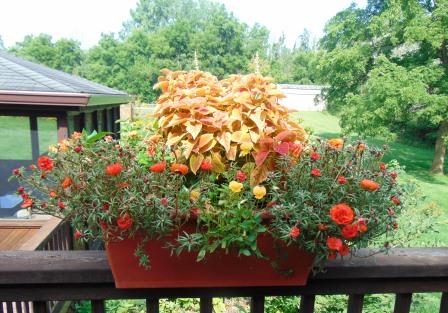 with (thankfully!) a smaller coleus and surprisingly, a few “Penny Orange” violas still hanging on despite the heat.  Most of the daylilies in the various gardens were finished, and I’ve spent hours cutting out dead bloom stalks, but happily one of my favorite very late varieties is gorgeous right now. 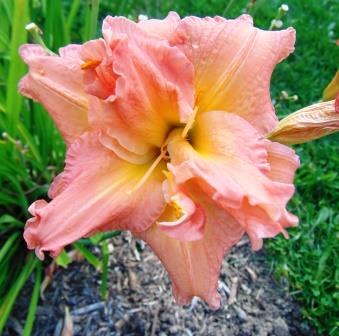 It’s a double peach that is one of the last of my 67 varieties to bloom.  It lives in the South Island, in front of the Lavender Slope, which is another of August’s favorite tasks. 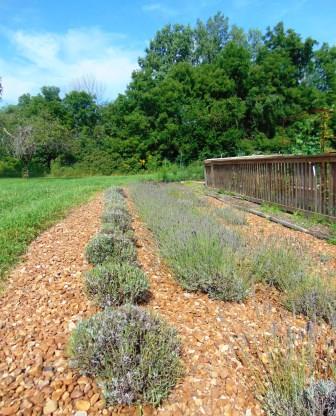 The lavenders were nearly finished blooming when we departed, but the lavandins were still in full bloom.  I should have harvested them before we left, but I couldn’t squeeze it in so now it’s just a matter of shearing each plant into a tidy half-sphere and tossing the stems on the compost.  As you can see from the photo, one row down, three to go.  Oh, I could chop the stems up into sachet bags because the fragrance is still amazing, but there are tomatoes and cucumbers to can!!!  And truthfully, I never got around to using the lavender I harvested last year!  But, it’s essential to shear the plants just as soon as they finish blooming, partly for the health of the plant, and partly so new growth can be clipped to propagate new plants.  A few plants have perished in the last two winters, so I need to make some replacements.  Propagating lavender is one of my favorite August past-times.  And when shearing brought the end of the row, my attention was captured by the butterflies enjoying the Cutting Garden, which is to the right behind the potager fence.   And, no, I still don’t cut bouquets even though it’s officially a “cutting” garden 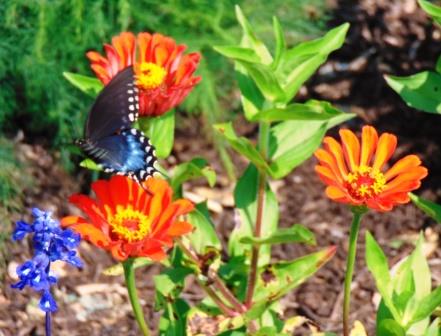 unless I’m expecting guests.  If I bring the flowers inside, only I can enjoy them, but if I leave them in the gardens all the bees and butterflies can delight in them as well.  There seem to be more butterflies this year, but I’ve still only seen 2 honeybees even when the lavender was in full bloom.  So, that’s my belated “Six on Saturday” for early August.  I hope you are enjoying August wherever you are!

A former professional herb and lavender grower, now just growing for joy in my new potager. When I'm not in the garden, I'm in the kitchen, writing, or traveling to great gardens.
View all posts by carolee →
This entry was posted in August, Six on Saturday, Uncategorized and tagged August gardens, container gardening, daylilies, gardening, lavender, shearing lavender, Six on Saturday. Bookmark the permalink.