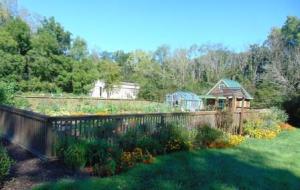 After five days of heavy rain, it is wonderful to see the sun beginning to light up the potager.  So, gathering my harvest baskets and camera, I waded through the puddles to see how things had changed during the deluge.

The first observation was the many cottonwood leaves that have already come down and settled into the flower beds.  It seems early, but it is almost mid-September so apparently it’s time.

Entering the potager, there were “waves” in the paths from mulch being swept along.  Some of the landscape cloth is entirely clear but there are tall piles of mulch here and there.  To the naked eye, the potager looks perfectly level, but heavy rains like those we’ve had recently reveal the truth.  There is a slight slope from the southwest corner to the northeast corner.  There’s lots of raking to level things out in my future.   (Sigh!)  Can’t help but smile as I pass the “Wando” peas.  They were 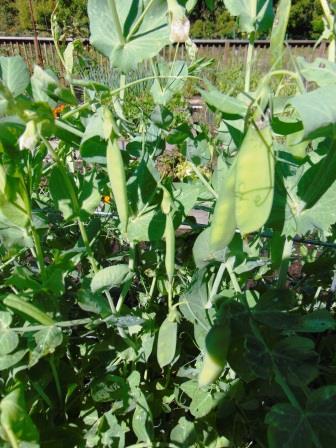 blooming before the rains began, but now there are dozens of pods forming.  With the five days of 95 degree heat and high humidity before the rains came, I wondered, but “Wando” has a reputation for tolerating heat and extremes and it looks like they deserve that good rating.  I’ve never grown parsnips before, so I was thrilled to see they’ve grown a good 4″ taller since the rain started.

That’s exciting!  And the “Butterscotch” winter squashes really added some pounds in my absence.  They’ll be ready to harvest soon, but note that dreaded squash bug just to the right of squash! 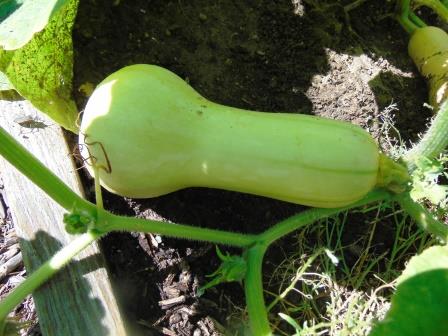 I’d love to report that they were lovely, but those days of heat made them a bit tough and HOT!  Too spicy for my palette, but maybe they’ll mellow out a bit if they’re cooked lightly and added to a pasta salad.  Those dratted spotted cucumber beetles didn’t take a break during the rains either.  They are everywhere, chewing on squash blossoms, bean leaves, and everything else.

There were at least 10 in this one squash blossom when I pulled it open, but all but the four who decided to pose for the photo escaped.  I suppose I should do something about their excessive numbers, but after reading “The Prodigal Summer” during the rains I am reluctant.  (Loved the book, by the way and if you have any interest in butterflies, moths, nature’s balance, etc. you probably will, too, although it was a bit sexy for my old-fashioned tastes.)  Once the leaves were dry, I picked various beans.  The Cannellini worried me, as some of the pods had black moldy spots.

Upon opening, the beans inside seemed fine, although surprisingly some of them had actually sprouted inside the pods!  And so, a lovely afternoon was spent harvesting “Dragon Tongue,” “Jade II,””Cannellini,” and “Inspiration” beans.  They aren’t quite as nice as the earlier harvests because of the holes made by those cucumber beetles (WHY don’t they just stick to cucumbers???”  And, they weren’t all supposed to be ready to pick at the same time, but despite careful planning according to the maturity dates, they are!  There were also jalapeno, red sweet cherry and bell peppers; a couple of cukes, a handful of radishes, two pounds of beets, and over two pounds of carrots.  I could have left the carrots, but I’m readying that bed for the strawberry runners that are beginning to form on the “Honyone” June-bearing plants. 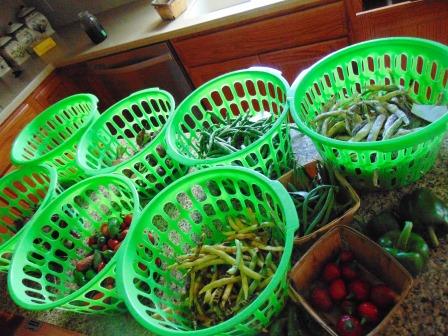 It’s lovely to know that even while I remained inside during the five days of rain, the potager was busily doing its thing, providing pounds and pounds of good eating!

A former professional herb and lavender grower, now just growing for joy in my new potager. When I'm not in the garden, I'm in the kitchen, writing, or traveling to great gardens.
View all posts by carolee →
This entry was posted in gardening, harvest, rain, Uncategorized and tagged cannellini beans, fall peas, growing vegetables, harvest, Potager, September garden, succession planting, The Prodigal Summer. Bookmark the permalink.