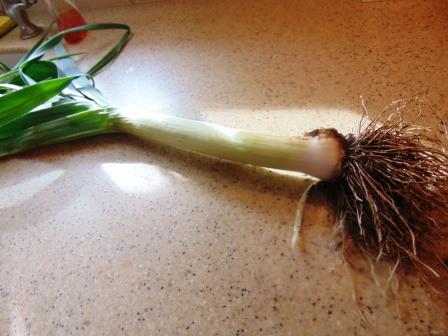 While it may not impress many of you who grow leeks successfully, and probably have for years, I’m elated!  I finally grew and harvested a leek!  This was not my first attempt.  Last year, I seeded some “American Flag” leeks, and a few germinated, grew terribly slow, were transplanted into the potager, and never became much bigger than pencils.

After studying seed catalogs over the winter, I selected this variety for another try. 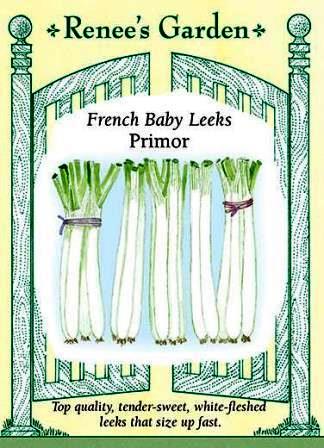 I’ve always had good luck with Renee Shepherd’s seeds, and this smaller, quicker leek seemed the best option.  Only a pinch of seed was sown last March, because we don’t use a lot of leeks and this was just a test.  However, I think every seed germinated and quickly grew into a sturdy transplant.  Over the winter, I had watched an episode of “Lavender and Leeks” showing Katie planting leeks into her allotment.   (It’s my favorite You-Tube view, so check it out if you haven’t before.)  I’d always thought you had to dig a big trench, plant the leeks in the bottom and slowly fill it as they grew, rather like celery.  I’m sure that’s a standard method, but Katie just makes a deep dibble hole and sticks the transplant in.   So, that’s what I did, except I filled the hole around each transplant with good compost to offer more food.  There was more rain this year, and I think that helped as well.

The result was a patch of lovely, large leeks.  The leeks are actually larger than I expected, growing a good 2′ tall and 2″ in diameter.  Some are slightly larger, some are slightly smaller, but I’m happy with them all.  The first one harvested (shown above) provided 10″ of usable, deliciousness and was turned into a tasty traditional leek-potato soup. 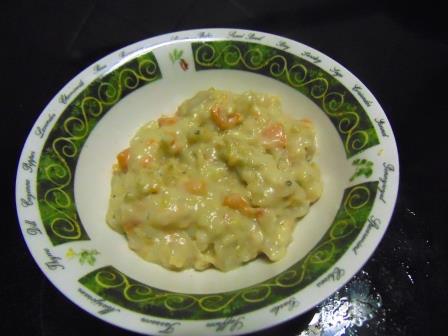 We had eaten all but this last little bit before I remember to take a photo!  There are still several leeks left, so I’m open to ideas for other ways to use my wonderful crop.   Next, I’m making the “Leek and Cod Gratin” from Georgeanne Brennan’s book “Potager, Fresh Garden Cooking in the French Style.”  Any other recipe suggestions?

A former professional herb and lavender grower, now just growing for joy in my new potager. When I'm not in the garden, I'm in the kitchen, writing, or traveling to great gardens.
View all posts by carolee →
This entry was posted in Leeks, Uncategorized and tagged French baby leeks, gardening, grow your own food, growing vegetables, Indiana gardening, Leeks, Potager. Bookmark the permalink.

15 Responses to My first LEEK!

Leave a Reply to Over Soil Cancel reply