Last evening I invited guests for dinner.  In addition to a roast pork loin with blackberry sage sauce, each variety of winter squash grown in the potager this season was roasted as well.  I wanted to do a taste test, and my guests were more than willing to taste and evaluate.   The squash were cut into serving-size pieces, skin left on, seeds removed, drizzled with a bit of oil and maple syrup, and a very light sprinkle of salt and freshly ground pepper.  They roasted for about 40 minutes at 325 degrees (the desired temp for roasting the pork) until fork tender.  Here’s what they looked like when they were ready to serve: 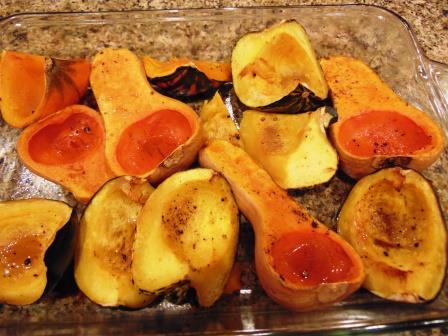 All four of the varieties selected for the potager were chosen because they were listed as “compact,” “single serving” size, and good storage quality.  Beyond that, four different types were chosen to provide a variety of shapes and colors.

The least popular in taste and texture was “Carnival.” (Bottom row, pieces 2 & 3) While one of the prettiest squashes, the texture although not really “stringy” was still more “stringy” than any of the others.  The flesh was pale yellow and of good thickness.   However, my diners felt it was a bit dry, and lacked in flavor.   Apparently, according to the catalog, the flavor improves with longer storage, so it will get another try later this winter.

A bit more moist and flavorful was “Honey Bear,” (Bottom row, far left piece) an acorn type that grows on a very compact plant.  The “meat” of the squash was pale gold, not very thick, but the texture was good.  The flavor was fairly bland.

Everyone enjoyed the “Butterscotch” butternut squash (Bottom row, fourth piece from left) for its deep orange color, smooth texture and excellent sweet, nutty flavor.  The edible flesh is much more abundant per squash for this variety.

But far and away, everyone picked “Orange Magic,” a mini hubbard squash (Top row, far left piece….where are all the other pieces?  Well, when I remembered to take a photo, all of the Orange Magic had been eaten except for one piece!!!)  It was definitely best-flavored with a smooth, buttery texture.  The flesh was deep orange, and while not as abundant as “Butterscotch” it was acceptable.

In terms of production, “Butterscotch” is the big winner, producing 6.5 pounds per plant in a year when all the potager’s cucurbits struggled.   Most of them are about 6″ long and 3″ across at the base.  Only part of the harvest is shown above.   Although the catalog describes it as “compact, space saving vines” it definitely overran its 6′ x 6′ bed.  It was an All-American selection in 2015 and resists powdery mildew.

The second most productive was “Orange Magic,” which was tied to a trellis to save space, but would have been happier on the ground, I think.  It’s 3-4′ tall, thick stems were sometimes broken over by heavy winds.  Despite this, it produced 4.75 pounds per plant, and its brilliant orange fruits were very decorative in the potager. 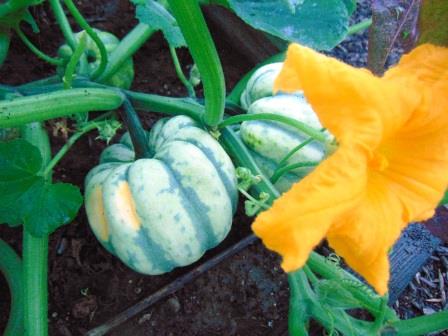 Both “Carnival”(shown left) and “Honey Bear” produced 2.5 pounds per nicely compact bush plant.  The flowers on “Carnival” were huge!  Since there wasn’t much difference in production or flavor, I’d choose to grow “Carnival” again just for its delightful decorative use in autumn decorating.

“Honey Bear” is a solid, deep, dark green but to me the fruits are almost too small for a single serving.

Now that the productivity and taste results are in, it’s just a matter of waiting to see which varieties store best.  Since space in the potager is limited, only the very best performers will go into the ground next summer!  Hopefully, it will be a better growing year for members of the squash family, but even this year’s small crop will provide several delicious meals.  What squash did best in your garden this year?

A former professional herb and lavender grower, now just growing for joy in my new potager. When I'm not in the garden, I'm in the kitchen, writing, or traveling to great gardens.
View all posts by carolee →
This entry was posted in Uncategorized, vegetable gardening, Winter Squash and tagged "Butterscotch" squash, "Carnival" squash, "Honey Bear" squash, "Orange Magic" squash, gardening, growing your own food, Potager, winter squash comparison. Bookmark the permalink.