This will be a short review, because there’s not much to harvest outdoors in December in central Indiana!  It was a cold, bleak month overall, with very little sunshine or snow.  The temperatures dropped and by the time I dug the little parsnip crop (a trial planting that yielded only 2 lb.) the ground was frozen 4″ deep so it was cold, cold digging. 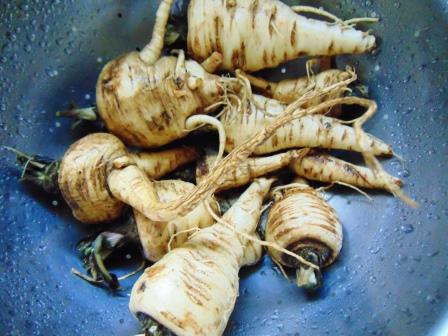 They aren’t the uniform, perfect parsnips found in the markets, but they are mine!  They will be roasted with chicken for tonight’s dinner.  The last of the leeks were pulled for the leek-potato soup served at our tree decorating party in early December, and a really delicious leek-potato-cod gratin after Christmas used up the very last ones.  (Recipe below.)  I’ll definitely grow lots more “French Baby” Leeks next year.

The other crop harvested was spinach, but only the row not under the little poly-tunnel.  I’m saving that so I’ll have something to harvest in January!  There were also various herbs snipped for holiday cooking, but no major quantities of anything.  Last year, several pounds of carrots were dug and it hadn’t frozen enough to kill all the lettuce, so there was 15 pounds of produce.  This year’s December total is less because there were no carrots left to dig.  The total was only 6.5 pounds.  The total 2018 harvest?  Not too different from 2017, the first year records were kept for the potager.

There is no need in strive to increase the number of pounds produced, because there was more food to eat and preserve than we need, plus all we give away.  However, the gluts and famines need to be eliminated, so that there is a more constant supply of basic crops without gaps.  The 2019 potager needs more storage onions, less garlic;  more carrots, fewer beans; about the same amount of La Roma III tomatoes, but a second smaller crop for late season, and fewer large slicing tomatoes;  more standard green bell peppers that we really use, and fewer “cute” peppers that we rarely use.  That’s the analysis.  Now comes the fun part:  planning and dreaming! 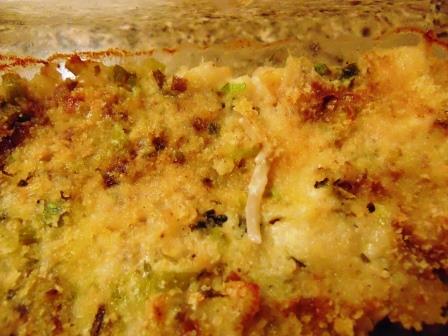 In case you have leeks, here’s the gratin recipe: Slice leek finely to make 2 c. and coarsely grate a potato (1 c.)  Set both aside.

Place 1/2-3/4 lb. fresh cod in a lightly buttered baking dish.  Add 2-3 T water.  Microwave just until the fish breaks into flakes when poked with your finger in the center, usually about 4 min in my microwave.  Remove from microwave and allow to cool a bit.  Meanwhile, in a large skillet with 2 T. olive oil and 2 T. butter, saute the sliced leeks over medium heat until tender.  Add 1 heaping T. flour mixed with 1/4 tsp. salt, stirring well as it cooks for 2-3 minutes.  Stirring, add 3/4 c. milk and any liquid left from cooking the fish.  Cook until mixture begins to thicken.  Remove from heat and add the potatoes, 1/2 c. grated Monterey Jack cheese, 2 T. chopped parsley, 1/4 tsp. Old Bay seasoning and some coarsely ground black pepper.  Preheat oven to 375 degrees.

Gently break fish into flakes and gently stir into leek mixture. Pour back into baking dish.  Sprinkle generously with Panko bread crumbs (or other bread crumbs) and bake at 375 degrees for 20-25 min, until nicely browned.  Serves 4.

A former professional herb and lavender grower, now just growing for joy in my new potager. When I'm not in the garden, I'm in the kitchen, writing, or traveling to great gardens.
View all posts by carolee →
This entry was posted in garden planning, Harvest Journal, monthly review, Recipes, Uncategorized and tagged December harvest, gardening in Indiana, growing vegetables, leek recipe, monthly review, parsnips, Potager. Bookmark the permalink.

6 Responses to December in Review