As recently reported in my “December in Review” one of the potager’s crops that needs planning improvement is carrots.  I recall that there were gaps in production and at times there weren’t enough to meet needs, but a quick check of the harvest journal makes it apparent that there were even larger gaps than I remember.  In addition,  it reminds me that there was too long a wait for the first carrot (Danvers Half Long)…not until July 2nd!  And, after frost there weren’t any carrots left to store for winter.  If that all sounds like an absolute failure, it wasn’t because there were tasty, beautiful, delicious carrots harvested.  Actually there are 11 3/4 pounds recorded in the harvest journal…just not enough to meet demand and not spaced properly.  (I must confess that many, many young carrots were harvested, brushed off and eaten in the garden as a mid-afternoon snack that were not recorded.  Justified as “thinning.”)  And, a second confession:  there was no succession plan for carrots devised for 2018.  Sad, but true!  Unlike the careful plan for beans, peas, melons, etc.  the carrots were just planted where indicated on the initial spring planting map, and then sprinkled haphazardly in small spaces later as other crops came out.  The only planned seedling after that first one was the “New Kuroda” storage carrots, a double row  intended for storage, but which ended up getting dug for holiday meals and parties.  This year it will be different!

The first step in fixing the production problem is to study when the carrot planting began.  This is when the garden journal earns its keep!  In 2018, “Little Finger,” “Red Core Chantenay,” and “Danvers Half Long” were all planted on April 11.  That’s about as early as I can plant carrots and expect them to germinate and grow without being killed by hard freeze.  With maturity dates of 62, 72, and 75 days respectively, there should have been a continual harvest for several weeks. However, trouble began when “Little Finger” failed to appear.  It should have been the first variety to harvest, but unfortunately I planted leftover seed, and the germination was horrible.  Well, “nonexistent” describes it more accurately.  And the initial plantings of all three varieties were too small.

Despite a note stuck in my planting journal to succession plant a few carrots every two weeks, that didn’t happen, partly because we had a really wet, cold spring; partly because there just was no empty space, but mostly because I just hadn’t planned well!  The second planting wasn’t until July 6 (“Red Core Chantaney” again) and the storage variety “New Kuroda” on July 12.  There was a late planting of “Royal Chantenay” on August 13, which was too late to produce a good crop, although a few small ones were harvested for our tree decorating party.  The final try was a free seed packet of “Tonda di Parigi” which is a little “ball” carrot planted on August 15…possibly too late if it had germinated, which it didn’t….

It’s pretty apparent how to improve on last year’s production.  #1  I really can’t plant much earlier than April 11th, but I can select an earlier variety.  For the 2019 season, I’m planting “Amsterdam,” reported to mature in 55 days and produces a blunt ended 6-7″ long “Nantes” type carrot, sweet, coreless, with short tops.  I prefer short, easy to dig carrots in my 8″ deep raised beds, so this one seems perfect. 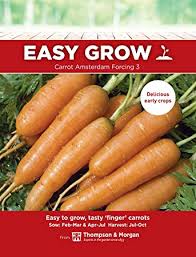 Apparently this variety has been available in Britain and Australia for some time, but it’s new to me.  Some list it as a good “forcing” variety.  I hope that doesn’t mean it needs greenhouse conditions to mature quickly!  Indiana springs are always a mish-mash of summer and winter conditions.  I’m also toying with the idea of starting a few carrots in a gutter in the greenhouse, which will be slid into their place in a bed once the weather settles, or possibly under a poly tunnel earlier, or seeded in a polytunnel directly.  Oh!  The possibilities!

#2  No gamble with old seed for that important first planting!

#3 Just to hedge my bet, in case the “Amsterdam” aren’t up to snuff, there will be a planting of “Nantes” (66 days) as well.  I’m not worried about too many carrots, since I begin pulling them while small for snacking.  The gardener’s reward!

#4 There will be more space designated specifically for carrots rather than just putting them here as there as pak choi, lettuces, and other early crops come out.  There will be fewer beans and less garlic this year and some of that space will go to carrots.

#5  Succession plantings will be made at least every three weeks, and no space wasted on those little ball types like “Parisian,” “Adelaide,” or even “Little Fingers.”  I need more carrot per inch than they produce, even if they are cute!

#6 Designate enough space for a big planting of “Scarlet Nantes” (65 days) so there will be at least one canner of pint jars for winter use in soups and marinated carrots. 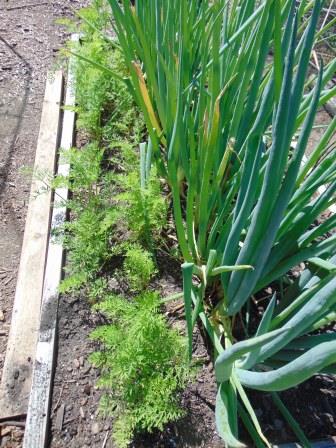 #7 Move the planting date for the “New Kuroda” up a week, and keep them watered better when they first emerge.  Last year I planted them, then left for Italy!  I’m surprised they did as well as they did, and I’m definitely happy with their texture, flavor, and keeping qualities.  They take a long time to mature (110 days) but will keep growing in cooler weather.  I’ve got the last two or three in the refrigerator just to see how long they’ll keep.  The photo was last year’s double row.  This year, I’m planning on eight rows minimum!

Now that I know the space needed, and the dates for planting, I can work out a succession schedule.  Tentatively, it looks like this:

April 10:  “Amsterdam” 55 days, and “Nantes” (66 days)….. May 1:  “Red Core Chantaney” (72 days) …..May 22:  “Nantes”  the big planting for canning…..June 15:  “Amsterdam” again, assuming germination was good on the first seeding and things look well with them, to go where the “Strike” peas will have been harvested; the peas will have improved the soil by fixing nitrogen…..July 5  “New Kuroda,” the big planting for storing for winter plus a generous planting of “Nantes” for fresh use until the ground freezes.  These will go where beans come out, again a crop that fix nitrogen for the carrots to use…..Aug 1:  a final planting of “Amsterdam,” assuming we’ve like them, just to see if they mature in time and how they grow as the days get shorter and cooler.

That’s the carrot plan for 2019…but you know what is said about “the best laid plans…..”

A former professional herb and lavender grower, now just growing for joy in my new potager. When I'm not in the garden, I'm in the kitchen, writing, or traveling to great gardens.
View all posts by carolee →
This entry was posted in carrots, garden planning, succession planting, Uncategorized and tagged carrots, gardening in Indiana, growing vegetables, kitchen garden, Potager, succession planting. Bookmark the permalink.