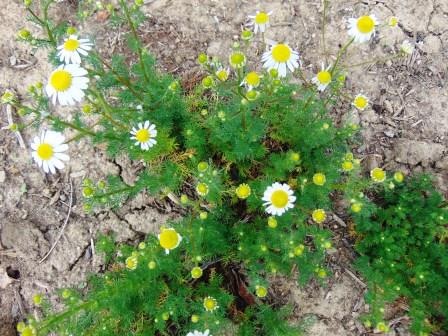 While there are two types of chamomile, generally the annual “German” (Matricaria recutita) chamomile is the most used.  It has tall (15-18”) stems of dainty white daisy flowers that are used for teas, culinary, and medicinal purposes.  If not all flowers are harvested, it generally self-seeds.  The “Roman” (Chamaemelum nobile, formerly Anthemis nobile) is a perennial (in milder zones than 5) that stays low (3-7”) to the ground and has very few flowers.  This low groundcover is often used for lawns and the seats of benches. Roman chamomile is often called “the plants’ physician” because when planted around its base, a sickly plant often recovers and thrives.  Both types of chamomile are happy to grow in any sunny location that is not overly soggy.   Both need light to germinate, so do not cover the seeds.  Simple sprinkle a TINY bit of the dust-like seeds onto the surface of moist soil, cover with clear plastic and set in a sunny or brightly lit location.  If soil begins to look dry, spritz lightly with warm water.  Germination is generally fairly quick. Both German and Roman chamomiles are said to have a “ripe apple” scent, both are loved by the fairies, and both were favorites of Peter Rabbit.

Whichever type is grown, only the small white flowers with their domed golden centers are used for culinary purposes, never the leaves or stems.  They should be picked when fully open and can be used fresh or dried for teas, baths, etc.  Choose a sunny morning after the dew has dried and simply rake fingers upward from the stems to quickly pops the flower heads free.  Spread the flowers on a screen in an airy spot out of the sunlight to dry.  Store in a cool, dry place as excessive heat will cause the essential oils to be destroyed and moisture can cause mold.

Much research has been conducted to explain chamomile’s medicinal benefits.  The Egyptians respected it above all other plants for its healing qualities.  It has been found to contain as many as 120 chemical compounds that may be active.  For centuries chamomile has been recognized to have a calming effect on the nervous system.  For that reason, it has traditionally been used to promote restful sleep and to calm spasmodic muscles.  It has also been used to reduce headaches, asthma, hay fever, and digestive problems.

Chamomile has anti-bacterial, anti-fungal and antiseptic properties.  Its anti-inflammatory effect has been used to treat stomach ulcers, inflamed mouth and throat problems, and bowel irritation.  Externally, cool chamomile tea is used as a wash for skin irritations and wound-cleansing.  In Tudor times, it was a preferred rinse for hair and was said to help many itchy scalp conditions, as well as its ability to bring out highlights in blonde hair.  It is a common ingredient in soaps, salves, hand creams and ointments for diaper rash.

It should be noted that a very small percent of the population, who happen to be allergic to the daisy family, might have an allergic reaction to chamomile and find that it heightens problems with asthma and hay fever rather than helping it.  While this rarely occurs, anyone who feels a constriction of the chest or experiences breathing problems after smelling the flowers or drinking chamomile tea should discontinue using any chamomile products and seek medical attention.

I wouldn’t be without German chamomile, and let it self-seed freely in the potager’s interior border where it happily fills in between the other edible flowers and herbs. Here are three of my favorite chamomile recipes:

Chamomile Shortbread   (I developed this recipe for our annual Fairy Days at the herb farm.  It was immediately a big hit!) Preheat oven to 325.  Combine 1 c. unsalted butter, ½ c. sugar and ¼ tsp. salt, beating until light and fluffy.  Blend in the zest of half an orange.       Mix 2 tsp. dried ground chamomile flowers (simply open a chamomile tea bag and measure, if you don’t have dried flowers on hand!) with 2 ¼ c. flour.

Stir flour into butter mixture, mixing until a smooth dough is formed.  Press into a buttered  8x 8” baking pan.  Bake 30 min., just until beginning to turn golden.  Remove from oven and cut into 16 cookies.  Allow to cool for ten minutes.  Remove from pan.

Chamomile Nut Bread  (This recipe is adapted from one published by the Bigelow Tea Company years ago.  It’s absolutely delicious! )  Place 6 chamomile tea bags (or 1/3 c. dried chamomile flowers) in ½ c. milk in saucepan over medium high heat.  Cover.  Heat until milk is hot but not boiling.  Allow to cool.  Squeeze bags to remove all milk, or pour through a strainer and press flowers to remove liquid.  While milk cools, grease and flour a 4”x 9” baking pan.  Preheat oven to 325 degrees.

Alternately stir in the milk and flour mixtures, mixing only just until blended.  Add ½ c. chopped walnuts.  Do not overmix.  Pour into prepared pan.  Bake 45-50 min, just until a tester in the center comes out clean.  Cool on a wire rack for 20 min.  Remove from pan.  This stores well, and is even better the second day.

A former professional herb and lavender grower, now just growing for joy in my new potager. When I'm not in the garden, I'm in the kitchen, writing, or traveling to great gardens.
View all posts by carolee →
This entry was posted in herbal teas, herbs, Recipes, Uncategorized and tagged chamomile, chamomile bread, chamomile shortbread, growing herbs, herbal teas, Potager. Bookmark the permalink.

8 Responses to Chamomile for Lawns/Yawns!