D had to make the long trip to the city (Indy) so I took advantage of his need by combining it with a trip to the greenhouse supply store on the south side.  He would have preferred to take his SUV with heated seats, but we took my old full-size pick-up so I could get a load of potting soil and propagating mix.  Now the transplanting can begin…..well, as soon as the soil thaws and is up to room temperature, which will take a couple of days after I move some bags to the basement!  But, it certainly makes me feel efficient, and one big step closer to spring.  I haven’t used Sungro before, so it will be interesting to see how it differs from Sunshine or Metro Mix as a seed starting mix. 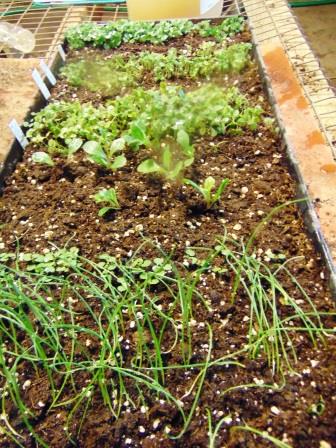 The seedlings will be relieved to have their own pots soon.  This flat is part of the (2/1) 2nd seeding, and although those baby cippolini in front look tiny, their roots are growing dense and intertwining as are the snapdragons in the center and the blue salvia at the far end.   I was surprised any of the 6 yr. old dwarf dahlia seeds sprouted, but there are 11, which will be plenty for containers.  Growing seedlings in the cool basement is ideal, because the low temperature generates strong root growth and slow top growth.  That’s exactly what we want for healthy plants.  The 1st plantings (1/20 not shown) are even further along, and the 3rd seeding (2/13 also not shown) is germinating nicely, especially the ageratums, although there is no sign of the sweet peas yet.  It was 3 yr. old seed, so we’ll just be patient.  There were a few things that were added to the 3rd seeding late, because the seeds just arrived in the mail:  “White Wonder” feverfew, alpine strawberries, Italian Red scallions and “Zinfandel” purple sweet peas.  The journal lists 39 varieties seeded so far, and things are still right on schedule.

I normally do about 4,000 individual pots a year (now that I’m retired) but I may do a few extra this year.  I’m worried that there will be more losses in the gardens and borders because of the lack of snow cover when the temperatures were -17,-12, -11, etc. and that so much mulch has washed away that roots may have been exposed causing even more perennial death.   I also want to beef up the cutting garden with more plants this year.  And, our garden club has taken on a bed for the community veg garden, so extra plants will be needed for that.

Until the potting soil is thawed, I’m enjoying the first amaryllis bloom of the season, and the FIFTH sunny day of February.  Sunshine is such a treat, especially with snow flurries and freezing on its way again tonight.  And, apparently I missed “National Drink Wine” Day yesterday, so I think a belated celebration is in order.  After dealing with those heavy bags and stairs it will without doubt be deserved!

A former professional herb and lavender grower, now just growing for joy in my new potager. When I'm not in the garden, I'm in the kitchen, writing, or traveling to great gardens.
View all posts by carolee →
This entry was posted in gardening, Uncategorized and tagged amaryllis, Indiana gardening, Potting soil, seeding preparations, seeding schedules. Bookmark the permalink.

17 Responses to Let the Transplanting begin!