Winter continues here in north central Indiana, with a lousy ten-day forecast ahead, but the seeding remains on schedule with the hope that Spring will come at some point, hopefully sooner than later, and that it will linger far longer than last year’s brief encounter.  Down in the basement, the fourth seeding was done in bits and pieces.  Two varieties of sweet peas, double white feverfew, alpine strawberries, onion “Sierra Blanco”, and an ornamental pepper “Fire N Ice” were seeded on Feb. 15 as scheduled and that should have been it.

However, you may recall my impulse order during another snowy interlude.  I didn’t expect them to arrive so quickly, but they came air mail on Feb. 21, and many of the packets advised to “plant immediately” so the 4th seeding was extended. 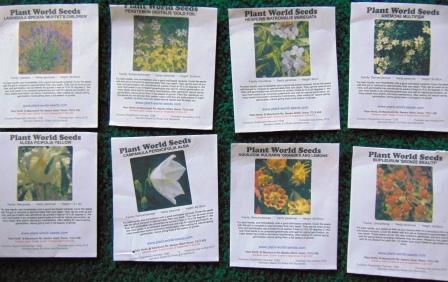 printed on each packet.  There were enough seeds that I planted only half of some envelopes.  The allium and erigeron seed packets were put in a plastic bag in the freezer to stratify.  I’ll include them in the next seeding. 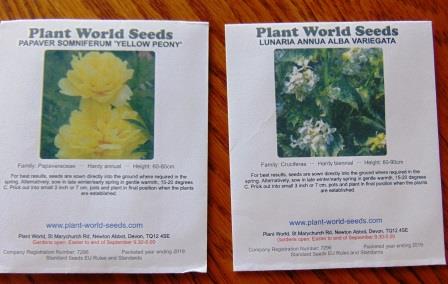 Through past experience, I know that lunaria (honesty or money plant) really hates being transplanted.  Not having any peat pots on hand, the lunaria will wait till I go to town, and the poppies will be sprinkled directly into the potager’s interior borders some nice, calm day.

In searching for another non-seed related item in my overstuffed upstairs storage room, I found an envelope of old asarina seed.  It’s a small-leaved vining plant that I love, sometimes called “climbing snapdragon” or “chick-a-biddy.”  This one has dark purple flowers and I’m hoping the seed is still viable.  Then the free seeds I’d selected from Renee’s Gardens offerings arrived on Feb 22: Lavender “Hidcote,” sweet marjoram, cutting celery, and her wonderful “Italian Red Scallions.”  There was a bit of room left in that flat, so I planted the leftover seed of Italian dandelions.  They are reported to be perennial, but just in case the ones that thrilled me last season don’t survive this exceptionally cruel winter, there’s back-up.  If they do return, I can always put extras in the garden club plant sale.

I’d been debating about starting some fava beans.  They were planted earlier last year, but for some reason I’ve been postponing them even though they were on the 4th seeding list.  And, I was out of potting soil, which was later purchased and a couple bags dragged to the basement to thaw.  Finally, it was warm enough to use, so the first packet of “Robin Hood” dwarf favas were planted on Feb. 25th, bringing the total for 2019 to 55 varieties.  Thus ends the long, drawn out 4th seeding…may they all thrive!

Loyal readers will know my color scheme does not include pinks or red, which explains why I’m giving away the packet of columbine seeds that Plant World Seeds included in my order.  I’m sure they are quite lovely but I’ve already seeded two types of columbines and don’t need more.  Plus I’m going to run out of space, so just planting them for the garden club sale is no longer an option.

The winner has been declared!

Hope your seeding is going according to plan.  It always interests me to read what other growers in other areas are planting and when.  February is nearly finished, and March’s arrival will bring Seeding #5!  Hopefully we will at least have crocus blooms by then!

A former professional herb and lavender grower, now just growing for joy in my new potager. When I'm not in the garden, I'm in the kitchen, writing, or traveling to great gardens.
View all posts by carolee →
This entry was posted in Indoor Growing, Seeding, Uncategorized and tagged February gardening, FREE SEEDS!, Indiana gardening, indoor seeding, lunaria, Plant World Seeds, Renee's Garden Seeds. Bookmark the permalink.