Our high hopes for February expressed last month were not included in Mother Nature’s plans.  Out of 28 days, there were only 7 with any sunshine.  Temperatures remained so cold that schools were cancelled some days.  Some days were snowy (but not enough to provide insulation for plants) or filled with 60 mph winds, or both.  There was hail and  even thunderstorms.  For the first time since I’ve lived here (26 years) there were no crocus blooms in February.  Thankfully, the amaryllis’ showy blooms helped provide balm for my soul. 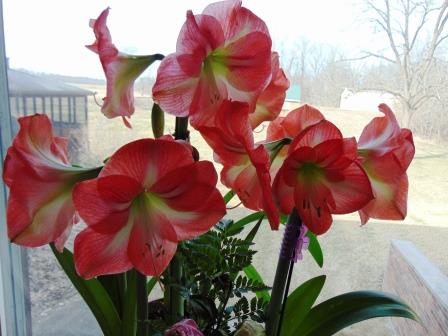 There are still three pots in the basement, just beginning to show growth that were purposely started much later to provide that same balm in March.

February seedings were done on schedule, with 55 varieties planted to date.  Germination has been excellent this year.  Transplanting is normal, ending the month at 840 babies in their own little pots.  The forecast is for temperatures to continue to be in the 20’s F for highs and the teens at night, so plants can’t be moved into the greenhouse despite the purchase of a new, improved heater this month.  I’ll need to do some testing with said heater so I’ll know how well it performs before even contemplating moving my precious pots.  So, I’m slowly filling the basement areas and crossing fingers and toes that March will take a turn for the better.  Those seedlings that have been transplanted are looking good. (Knock wood!)

The poly tunnel survived the extreme winds just fine, and the harvesting of spinach continues, with another half pound entered into the 2019 Harvest Journal.  That’s not much, but it’s a first and better than nothing besides adding a bright spot to our menu.  On the pantry front, the oregano and sage jars are now empty, and the last of the acorn and “Carnival” winter squashes were eaten.  There is still a basket of Butterscotch, which are holding nicely.  There’s lots of garlic, onions, a few potatoes, and we’ve barely made a dent in the frozen or canned goods.  The “test” New Kuroda carrot remains beautiful in the refrigerator, which bodes really well for next winter’s storage plans. 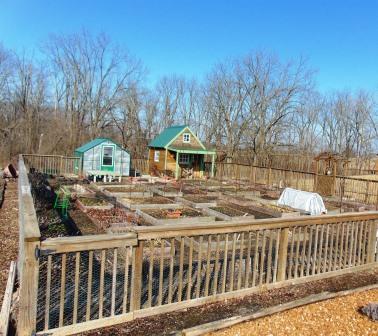 Sadly, there was barely any outdoor work accomplished due to the weather.  If you look closely at this month’s potager portrait, you may notice that some trimming and tidying has been done.  In studying the photo, I see that all the mulch has washed away just inside the left-hand gate.  The black landscape cloth is totally exposed.  And, although the plastic on the little poly tunnel is actually clear, it certainly appears white in the photo!  In the potager’s exterior border (not shown) tiny crocus tips have been joined recently here and there by 1/2″ daffodil tips.  Last year the chives were 3″ tall by mid-month, but they are wisely still below ground.  I did sprinkle a few poppy and larkspur seeds directly into the Cutting Garden and nigella, poppy and lettuce seeds into the potager’s interior borders as I always do in February, but two weeks later than usual.  I’m pretty confident that there will be enough freezing/thawing in the next few weeks to germinate them properly.

That’s the review for February here in north central Indiana.  Could have been lots better; could have been lots worse!  All of you could probably tell just exactly how antsy and thwarted I’ve felt by the excessive number of posts this month, a new high!  Hopefully I’ll soon be too busy outdoors to compose posts.  Wouldn’t it be exciting if there’s viewable progress next month?  So, Welcome March!  Fingers crossed the next monthly review will be more interesting!

A former professional herb and lavender grower, now just growing for joy in my new potager. When I'm not in the garden, I'm in the kitchen, writing, or traveling to great gardens.
View all posts by carolee →
This entry was posted in monthly review, Uncategorized, winter and tagged amaryllis, February, Harvest Journal, Indiana gardening, indoor seeding, monthly review, Potager, spinach, winter seeding. Bookmark the permalink.

16 Responses to February in Review