Anticipating that the first of the plants will be moved from the basement to the greenhouse soon, I transplanted more flats even though they had to go in awkward places here and there.  With all the “regular” growing space totally filled, the only criteria now is LEVEL!  I’ve learned over the years that seedlings actually appreciate a day or two of dim light or darkness after transplanting.  It must be exhausting and traumatic for them, requiring a rejuvenating nap afterwards.  So, several more flats were added, bringing the current total to 1,520.  What did I transplant?  Here’s the highlights.

Most of today’s babies are destined for the Cutting Garden, and include four favorites.  The first is “White Wonder” feverfew, that stalwart that produces clusters of double white daisies on durable stems.  It’s one of those lovely plants that always looks tidy; isn’t normally bothered by insects or eaten by critters.  It’s long-lasting in a vase and even dries nicely for winter arrangements and wreaths.  Sixty-four of the larger plants were transplanted today, about half of the seedlings that are growing.  The other half will be transplanted when they are larger.  Once they are planted into the garden, I’ll pinch out the top of about half of those plants so they will not only bloom a bit later than the unpinched plants, but they will immediately form more side branches.  I like the side branches, which are normally a bit smaller and slightly curved because they just fit into floral arrangements to much easier than the stiff, straight, bigger central stems.  If you don’t grow it, you should because it goes with everything!

The second batch was sixty-four Rudbeckia “Chim-Chimnee,” which is absolutely essential to summer bouquets.  I’ve raved about them before several times, mainly here.  Normally I have lots (but never too many!) because they return, but with this hard, hard winter without any snow cover, I’m worried they will be missing.  They are so outstanding in the garden, and such a great cutting flower that I can’t be without them.  They just bloom and bloom.

Next were thirty-two tall ageratum “Blue Horizon.”  These small powder-blue powder puffs in clusters atop stiff stems are lovely, and more tolerant of dry conditions than some cut flower plants.  Normally one sees the little dwarf ageratum for sale (and I transplanted ninety-six of those as well today!) but “Blue Horizon” is a tall variety bred for cutting.  While blue is not my favorite color, I use it in the gardens because it goes so well with all my beloved apricots and oranges.  Blue ageratum, white feverfew, and the rudbeckias are a perfect bouquet just as a trio, but add a vertical, like blue salvia or liatris and it’s even better. 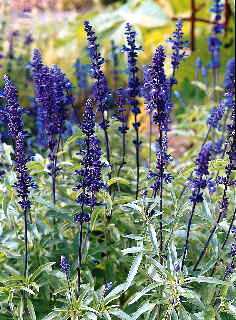 “Blue Bedder” salvia is my favorite salvia, although I’ve grown all of the others and many are quite nice, too.  I like “Blue Bedder” because it is taller, with longer stems and so much better for cutting than “Victoria” unless you are doing short bouquets or nosegays.  All the pollinators love it, and it just keeps blooming as long as you keep cutting.  Thirty-two of those were transplanted, which is about half the number growing.  Again, there normally is plenty already in the gardens, but I’m worried about winter kill with the salvia, too.  I’ll transplant the rest later when I have more space.

Now, if I’m wrong and there are plenty of survivors in the gardens, then I already have an alternate plan.  You recall my reluctance to cut flowers from the gardens, which resulted in the establishment of a designated Cutting Garden.  Then, I like that  pretty, sloped rectangular “bouquet” just beyond the potager’s back fence so much, that once again I hated to cut the flowers.  This winter I’ve been looking at the back two berry rows.  I have no clue why, but the red raspberries are just not doing well.  They’ve been in the ground (fall ones and summer ones) for three years now and are barely there.  Tha’t a lot of “wasted” space for all they work, water, and fertilizer it gets so I’m going to fill the space between the pathetic berry plants with excess cutting flowers.  1:  It will utilize good space, 2:  I think I will actually be able to cut flowers there without guilt  3: It makes running the drip hose more worthwhile and  4: It may make those raspberries get the message that they’d better up and doing something or they’re being replaced!

Transplanting certainly makes me feel like we’re moving forward (and I don’t just mean the stupid clocks!) toward the true gardening season.  Plus, we actually have sunshine today, the third so far this month!  Things are improving, kids, to just hang in there.  Someday soon, there WILL be crocus, I promise!  Meantime, I’m out to enjoy this sunshine by cleaning the greenhouse, moving the new heater in, and setting up the digital thermometer in preparation of moving those plants…maybe tomorrow!

A former professional herb and lavender grower, now just growing for joy in my new potager. When I'm not in the garden, I'm in the kitchen, writing, or traveling to great gardens.
View all posts by carolee →
This entry was posted in cutting garden, Uncategorized and tagged ageratum, cut flowers, cutting garden, double feverfew, Indiana gardening, rudbeckia, seed starting, transplanting. Bookmark the permalink.