Here’s the official “end of June” photo of the potager.  If you go back to look at the May Review, you can see quite a difference.  June began as a replay of April & May…cooler than usual and rain almost daily.  Very depressing and hard to get anything done unless one was wearing waders and had an iron constitution.  A few things (mainly shallots!) rotted in the excessive wetness, but most of the plants relished those conditions, especially the violas, peas, lettuces and other salad greens, radishes, and all the cole crops.  The really nice side benefit was the lack of insects.  No spraying for cabbage worms, no squashing of squash bugs, no baby grasshoppers, no pill bugs or Japanese beetles! 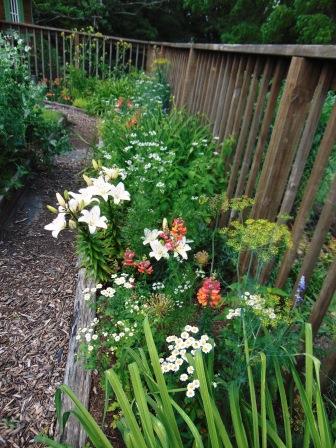 The potager’s interior borders have looked especially attractive this year.  The snapdragons love the cool dampness.  The Asiatic lilies have never lasted so long, and the dainty white cilantro flowers and dill heads add an extra enchantment.  Life was good, although soggy.

Finally, mid-month there were three dry days in a row.  Farmers frantically planted, and I was able to get the first truck of mulch in and mulched from dawn to dusk.  I am happy to report that except for the potager’s paths and the berry rows, all the mulching is now finished!  Normally it’s done by mid-May, so the end of June is very late.  Not being able to mulch meant that much more time was spent weeding and re-weeding and re-weeding again, which means that the planting is STILL NOT finished!!!

Another result of 3 months of nearly daily rains is that the plants are very shallow-rooted, since they didn’t have to grow downward in search of water.  So, by the second dry day in a row, plants like the beets on the left collapsed and pea leaves suddenly yellowed.  The lettuces and spinach threw down their leaves in surrender as well.  There was nothing to do but drag out and connect all the hoses, and spend hours watering to wean them, encourage them to not give up, but to grow some roots!

Three dry days in a row presented an opportunity to harvest and dry chamomile and elderflowers for teas, and the increased warmth encouraged more sprouting of seeds and blossoms on beans, squash, and cucumbers.  Peas were picked, shelled and frozen in the evenings after it was too dark to work outdoors.  But during the dark hours, others were busy as well. 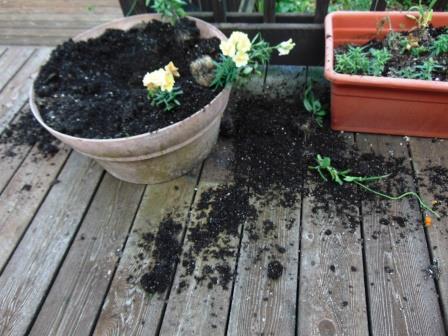 Yes, after the raccoons destroyed the strawberry crop, they turned their attention to other areas.  They dumped and ate nearly all the “French Fingerling” potatoes that were growing so nicely.  The deck planters have been designated target areas.  This poor planter has been destroyed three times.

The emilia and golden feverfew along the sidewalk has been replanted FIVE times!  So far, five raccoons have been relocated, but after extensive destruction in the Cutting Garden last night, it’s obvious there are more who need to take a joy ride.

By the third week of June, the menu of potager fare had greatly increased in variety.

The first (and sadly, only) fava beans were harvested.  The temperatures skyrocketed into the 90’s daily, and favas don’t like it above 75.  But, one delicious meal of favas is better than none, and now their space can be replanted with something that enjoys this heat.  The first zucchini was harvested and used in the traditional first panzanella of the season.  We’ve enjoyed the first kohlrabi.  There have been lots of garlic scapes, cabbage, and scallions.  The first beans finally recovered from the hail damage and are producing well.  Fresh “green” beans always

taste so much better than canned or frozen!  Bell peppers and the wonderful “Fehr” peppers are abundant, and the first “Indigo Cherry” tomato was harvested.  The cucumbers are climbing their trellis, and I’m already giving them away because I’m too busy to start canning pickles!

The final week of June has been a scorcher.  The weatherman warns us to stay indoors as the heat index is so high, but there’s too much catch-up to do!  The Cutting Garden is the poor stepchild, the one that gets the leftovers after the other gardens are planted.  It’s always the last to be planted (the potager is first, the Front Garden, Front Island, Deck Garden, Addition Garden, Lavender Slope, Blue Garden and Fairy Garden follow in that order of importance.)

So in 96 degree heat, it was finally planted and mulched.  Doesn’t look like much so far, but it will be filled with color in a month.  Having neglected all the deadheading and edging while I mulched, all the gardens need attention.  Newly planted annuals and perennials need daily watering until they adjust to being in the ground.

The blackberry row finally got clipped and cleaned.  That day I pulled my smartphone from my back pocket to make a call, and got a message “Temperature alert!  Phone must be cooled in order to operate!”  I decided that if it was too hot for my phone to work, maybe I shouldn’t be working so hard either, so I didn’t put on the mulch there and came indoors to shell peas instead.

The melons are loving this burst of heat and have exploded with growth and blossoms.  You can’t see them, but there are egg-sized melons hidden under those leaves.  The peppers and eggplants are also happy with the heat.

Sadly, I’m still way behind on the planting, and the entire succession-planting plan went out the window weeks ago.  After the first peas came out, “Teddy Bear” pumpkin seeds were planted along the fence, but they’ve failed to germinate.  Same with the parsnips that I’ve tried to sprout indoors.  The winter squashes have yet to be seeded, and the third plantings of beans and carrots needs to go in the ground, so July will be just as busy as June was.

For those interested in the numbers, the harvest jumped to  71.50 pounds after May’s dismal 20 lbs. (57.5 in 2017; 104.5 in 2018)  The biggest difference over last year is squash…this year we’ve had 1, last year we’d had dozens; same with kohlrabi.  Last year I was already canning beans and giving them away.  This year we’ve had one small picking.  But, we’ve had plenty to eat all season (just not as much variety until now) and the freezer is filling.

That’s June in review.  It’s hard to believe it is over and that July is underway.  Hopefully next month I can report that I’m all caught up, and just reading in the shade, overlooking beautiful gardens!

A former professional herb and lavender grower, now just growing for joy in my new potager. When I'm not in the garden, I'm in the kitchen, writing, or traveling to great gardens.
View all posts by carolee →
This entry was posted in monthly review, Uncategorized and tagged critter control, fava beans, growing vegetables, harvest totals, Indiana gardening, Indiana weather, peas, Potager, raccoons, watering. Bookmark the permalink.