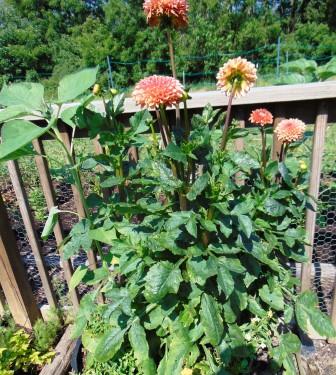 My visions of “Dallying with Dahlias” are beginning to come to realization.  The first of the dahlias are beginning to bloom.  As you may recall, there were two batches of dahlias:  the tubers saved from last year’s order from Brent & Becky’s bulbs (which were large and very productive last summer, were stored in the basement, divided and planted at the same time as batch #2)) and the first-time order from Swan Island Dahlias, which were lamented in a previous post as being so small for the price.  Several of you responded with positive comments, so I hoped for the best.  Now, at the beginning of the dahlia season, I can report the following:

1.  The saved bulbs from B & B all returned and in fact did multiply last summer to provide several new plants for this year.  The first to bloom (shown in the above photo) is “Sylvia,” still one of my favorites because it works so well as a cut flower, is prolific, early, and doesn’t fall over without staking.  She’s already 3′ tall.  All of the saved dahlias are thriving, and several are budded.

2.  All of the Swan Island bulbs did indeed produce growth as guaranteed, but some of them (the most expensive of course) never did seem very happy and are remaining small.  Maybe they needed more coddling, but ALL of the dahlias received the same care, and the others are thriving.  Here’s what about half the Swan Island plants look like at present: 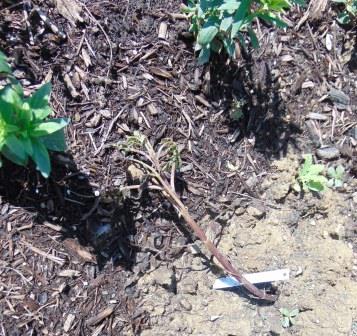 3.  To date, none of the Swan plants have produced a bud, or are branching well.  At this rate, I doubt I’ll get any flowers.  I’m just hoping they snap out of their funk, and produce some decent sized tubers that I can store and try again for flowers next year!

I’m definitely not thrilled.  If there is improvement, I’ll be sure to let you know!

A former professional herb and lavender grower, now just growing for joy in my new potager. When I'm not in the garden, I'm in the kitchen, writing, or traveling to great gardens.
View all posts by carolee →
This entry was posted in dahlias, product review, Uncategorized and tagged dahlias, edible flowers, Indiana gardening, Potager, Swan Island Dahlias. Bookmark the permalink.