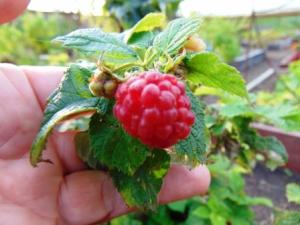 Many of you have heard of the much-touted new family of fruiting shrubs introduced by Fall Creek Farm called “Brazelberries.”  There are several commercials advertising them on television and ads in most major gardening magazines, claiming that they are going to revolutionize small-space fruit growing.  They offer a selection of raspberries and another of blueberries, all bred to be compact, thornless, and self-pollinating.  I was excited when I was given four of their “Raspberry Shortcake” plants to trial four years ago.  The tag and the ads show a nicely rounded plant just covered with delicious red raspberries.  I couldn’t wait to start picking!

As directed, I planted them in large containers.  They do grow rapidly and stay compact, about 2′ in height.  When freezing temperatures threatened the first year, I moved them into the basement since they were youngsters, where they would stay cool but not freeze and receive adequate light from sliding glass doors.   As soon as spring arrived, new canes began to develop and some of the older canes grew new leaves.  I waited and watched all summer, keeping them watered and only adding a small layer of compost as instructed.  Over-fertilizing reduces berry production.  Never did a bud form, so there were no berries.  I was disappointed, and felt I must have done something wrong (although I have been growing other berries for forty years with success.)  Or, possibly they just needed to be older.  So, I went on-line and reread the growing instructions provided on their site.  The only thing suspect was possibly underwatering so I was more careful the second growing season, and again in the third.  Still there were no berries.  They did not rot, they were not frosted, they were not over or under fertilized.  I was so disgusted at the amount of time, hauling indoors and out, watering, and talking to them with encouragement, that I nearly just tossed them last fall rather than messing with them for another season.  After all, third time’s charm, and they’d already had three growing seasons.  But, I hate to fail.  I hate to throw out a perfectly healthy plant (let alone four of them!)  They are green and compact, and thornless, and make a nice patio plant.  If they were just a foliage plant, they were worth growing, I reasoned, so I hauled them indoors once again last autumn.  This variety is supposedly hardy, so I debated about just planting them in the ground, but I wanted to give them as long a growing season as possible.

This spring, in addition to their “Let’s have a great growing season!” pep talk, I gave them a stern warning, having decided over the winter that the big pots could better be used to grow something with flowers, like hibiscus, or something more useful like lemon verbena.  This was their last chance.  “Produce berries, or you are going into the garage sale!”

A couple of weeks ago, a few blooms appeared on two of the plants.  Today, I have one berry.   They are supposed to be winter-hardy here in Zone 5, so I am going to plant two of them in the ground, and give the two that had a few blooms another chance.  Maybe now that they’ve figured out how to produce one berry, they will produce more?

A former professional herb and lavender grower, now just growing for joy in my new potager. When I'm not in the garden, I'm in the kitchen, writing, or traveling to great gardens.
View all posts by carolee →
This entry was posted in gardening, harvest, Potager, small fruits, Uncategorized and tagged Brazelberries, gardening, potager, raspberries, Raspberry Shortcake, small fruits. Bookmark the permalink.

9 Responses to A Four Year Wait