The potager’s beds are filling up fast, as many transplants were planted in the past two SUNNY days!  Hopefully today more direct seeding will occur, and the lower parts of the lawn can be mowed before the next rains come…possibly this afternoon.  None the less,  the last of the scheduled seedings for spring must take place.  After this, there will be occasional “indoor” seedings throughout the summer, but these will be just a pinch of this/pinch of that to provide transplants as space empties and earlier crops must be replaced.  A few winter squash will be started later on, but the scheduled 13th seeding won’t happen until mid-June when the fall cole & leek crops are seeded.

So what’s on the list for #12?  Sunflowers!  The selection has expanded for this year in the endless search for branching sunflowers of the right colors for the Cutting Garden, plus retaining the favorites from past years.  This is the first of several succession plantings of sunflowers, although after this, most will be direct seeded into the ground rather than starting them indoors.  The varieties this year are:  “Sunrich Orange,” “China Cat,” “Ruby Eclipse,” “Starburst Aura,” “Earthwalker,” and the lovely “Premier Orange” single stalk from last year. 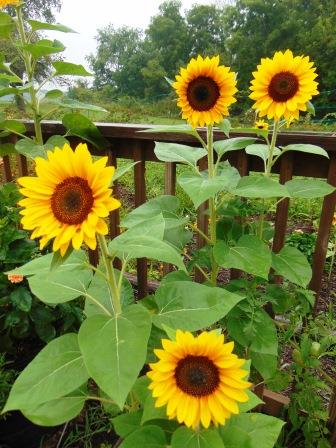 Can one every have too many sunflowers?  I think not.  Two varieties are destined for planters:  “Peach Passion,” and “Munchkin.”  Also, the vining melons destined for climbing the potager’s trellises (which look quite bare in the above photo) get seeded into individual pots now, including a couple of new ones:  “Hannah’s Choice” and “Tuscany” cantaloupes and “Earlidew” melons.  Yet another seeding of “Bianca di Maggio” cipollini onions gets seeded this week, because it won’t be long before the very first ones planted are harvested for grilling.  This planting is intended for canning for winter enjoyment as marinated cipollini.

A quick inventory showed that some of the older summer squash seeds have not yet germinated, so a few more of those were seeded as well.

In addition to this 12th seeding, all of the tomatoes and peppers have been moved into larger pots and into the greenhouse, and most of the marigolds and zinnias as well, along with the dahlias so the basement is emptying out.  The totally drenched conditions have limited planting to the raised beds, so no planting, weeding or cleaning of gardens has taken place.  The soil is too wet to risk sinking to the axles with a load of mulch, so that project is still on hold as well.  I’m really behind considering it is the end of the first week of May, but my impatience is tiny compared to that of the area farmers, who are still unable to get into fields to plant…a good 3 weeks behind schedule.  To give you an idea, usually over 80% of the corn is already planted by now in the I’s (that’s Indiana, Illinois, Iowa) and by next week, 80% of the soybeans are planted as well.   So far this year…nothing!  It’s getting scary, as soon it will be so late that some crop insurance already paid for by farmers will no longer cover such “late-planted” crops.  With prices already at rock-bottom to even make a profit, we could soon see more farmers “go under.”  My heart goes out to all the farmers who have little chance to get fields planted for the foreseeable future…three more weeks of frequent rains forecast for our area!

Meantime, it’s lilac time and the tulips are still looking great in this unusually cool, wet month of May.  Thank goodness for raised beds, or I’d still be waiting to till rather than already harvesting some early spring crops!  Hope it’s a bit drier wherever you are!

A former professional herb and lavender grower, now just growing for joy in my new potager. When I'm not in the garden, I'm in the kitchen, writing, or traveling to great gardens.
View all posts by carolee →
This entry was posted in Indoor Growing, Seeding, Uncategorized and tagged cutting garden, growing your own food, Indiana gardening, Indiana weather, indoor seeding, kitchen gardens, melons, Potager, sunflowers. Bookmark the permalink.