Out with the Old, In with the New….sometimes!

Our record heat here in Indiana is generating a quicker-than-normal turn-around in the potager.  A premise of the potager is the replacement of one crop as soon as it is harvested with a succession crop, thus keeping all parts of the potager productive at all times.  This produces a massive amount of food in a small space over the season.  Of course in France, where this method grew famous, it’s a much longer growing season than here in the Midwest.  This year, when the weather was “long winter, blink of spring” and a May with heat normally associated with July/August along with record low rainfall, many of the spring, cool weather crops just gave up.  Today, a small planting of early “Strike” peas was picked and clipped, having produced only one highly delicious meal.  There were no more buds or flowers, so it was finished.  I clip off the stems of peas at ground level because as a legume, peas can “fix” nitrogen in the soil and I want it to stay there to nourish the next crop.  The stems go into the compost pile, where they will also add nutrients. 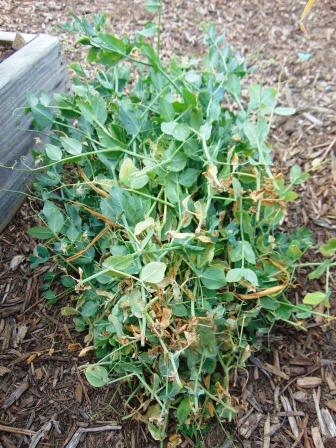 I would recommend “Strike” as an early “one-pick” crop, a quick “in and out.”  Into its space went this flat of “Bianca” cipollini. 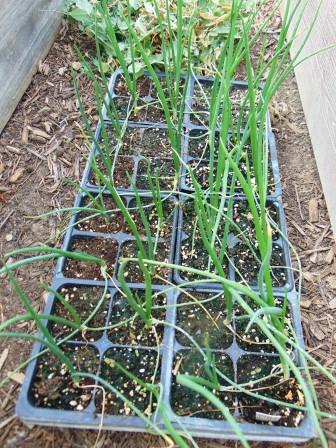 Simply dig a trench the width of the soil cubes next to the pea roots and gently place the cubes edge to edge. 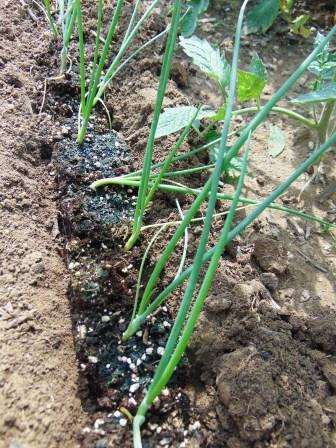 Water, and cover with soil and very quickly there will be another crop ready to harvest.  The next step is to refill the seeding 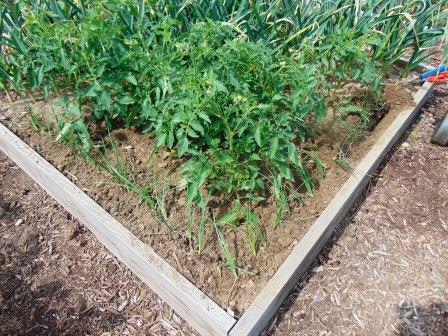 flat with soil, and seed another batch of cipollini because a) we love them in a variety of uses and b) they will grow throughout the entire season whatever the weather, and c) they take very little space and can be tucked in here and there throughout the potager as other crops come out.  Most likely, the cipollini just planted will not be replaced by another crop, because the tomatoes they surround will take up all the available space by then.  However, these tomatoes are “Polbig,” an early cropper that will come out and be replaced by winter squash.  Just another example of “Out with the old, in with the new.”

But not every crop is replaced immediately.  Bed 4a was planted with a row of “Royal Burgundy” beans, a center fence with a band of “Green Arrow” peas on each side of the fence, a row of “Baker” spinach, and an edging of mini orange marigolds and orange violas.  The peas hide the beans, but trust me, they are there, blooming rampantly and already setting tiny beans. 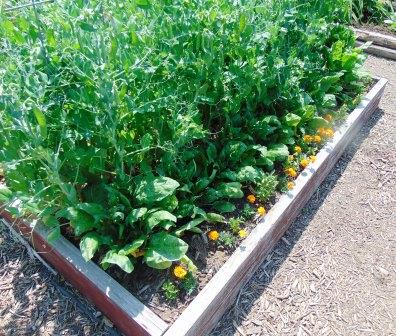 It’s the spinach side that has worked so well.  The peas provided shade for the spinach for half of each day, extending the harvest time greatly over spinach planted at the same time in more exposed parts of the potager.  And reciprocating, the spinach shaded the roots of the peas, keeping them cooler and happier.  I’m definitely using this plan again next year.  But, if you look closely, you can see that finally spinach is bolting and already has seed heads forming.  Not surprising in this heat, and it has already been harvested multiple times.  So, out it came, providing a lovely 2 lb. basket of leaves.  However, instead of planting another crop immediately, the peas got a good watering and a layer of mulch filled the space. 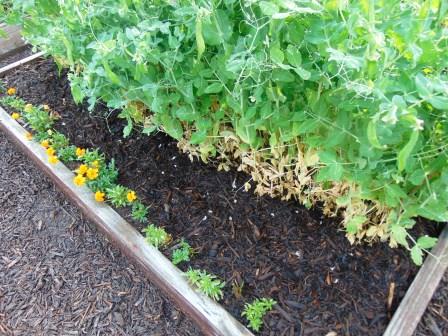 This will allow easier picking of the peas that are just now forming.  When the peas come out, their fence will be filled with mini pumpkins, which will need all the space.  For most of the potager things go in, mature to harvest, go out and are replaced by new crops.  It’s a fascinating puzzle to fit the timing, selecting the crops that will fit the space and be happy in the current and future weather conditions for their growth period.  I find it much more intriguing than computer games or soap operas, and definitely more rewarding.  By season’s end, all my shelves and the freezer will be filled and throughout the summer and autumn,  we will enjoy the freshest, purest produce possible in a wondrous variety.  Talk about “the good life!”

A former professional herb and lavender grower, now just growing for joy in my new potager. When I'm not in the garden, I'm in the kitchen, writing, or traveling to great gardens.
View all posts by carolee →
This entry was posted in gardening, succession planting, Uncategorized and tagged cipollini, growing your own food, Indiana weather, kitchen gardens, peas, Potager, succession planting. Bookmark the permalink.

10 Responses to Out with the Old, In with the New….sometimes!